mike25
2 hours ago
Well Jorge , I just reread a post

MSX IS IN PROCESS OF MAKING A MAJOR ACQUISITION

MSX HAS CONFIRMED THAT MINA PASCUA IS OWNED BY JORGE LOPEHANDIA

MSX IS LISTED ON THE CNSX EXCHANGE

1) Acquire 50% interest in Gold/Silver/Copper Mine in CHILE.

a) 50% interest in Mina Pasqua in partnership with Jorge Lopehandia.

For reference; a map of Pasqua Lama (MWR - Mr. Lopehanida contended interest lie with Mina Pasqua on Chile side of map.) 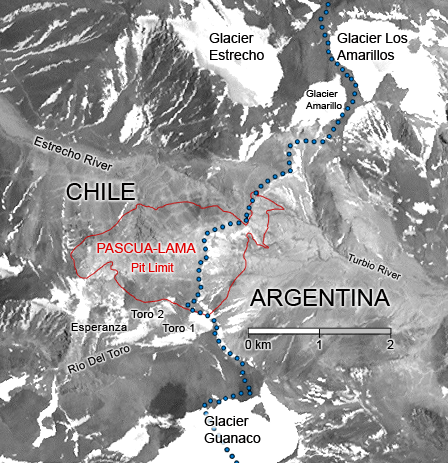 2) Exploration & Development of Properties in Montana. No recent updates from company.

PRESS RELEASES: CURRENT AND OR RELEVANT

13331 Woodcrest Drive
Surrey, BC, V4P 1W4
N E W S R E L E A S E
Barrick and BCSC Regulators Court Ordered to
Stand Trial in Chile in 2017
February 17, 2017 - Mountainstar Gold Inc. (“the Company”) announces that their Chilean lawyer, Juan Guillermo Torres Fuentealba, has succeeded at naming, and calling to the Chilean judicial system, the participants in the Pascua Lama fraud in Chile. This relates to Canadian executives of Barrick Gold (“ABX”) and the British Columbia Securities Commission (“the BCSC”).
The initially named attendees from the BCSC are:
- Romolo Di Fonzo, linked to transactions at the BCSC from 2006 to 2017. Some of these transactions include Barrick/Silver Wheaton, Barrick/Royal Gold and Barrick/Infinex Ventures Inc. Mr. Di Fonzo has interfered with the business relationship between Mountain-West Resources (“MWR”)/Mountainstar Gold (“MSX”) and the plaintiff Mr. Jorge R. Lopehandia, since 2010; and
- Roy Leon, who has libelled Juan Guillermo Torres Fuentealba, MSX and Jorge R. Lopehandia regarding the rights of the named parties as plaintiffs of legal action C-1912-2001 at the 14th Civil Court, Illustrious Court of Appeals of Santiago and at the Excelentisima Supreme Court of Chile.
The letter of December 16, 2015 from the BCSC to MSX will be used as evidence against BCSC staff in Chilean courts.
The onus on the BCSC and Barrick in Chile will be to prove that Jorge R Lopehandia has "nothing to do with Pascua Project or asset, or no longer has a right to defend Mina Pascua theft after October 02, 2014 in Chile due to a negative Supreme Court of Chile decision - apparently favouring Barrick only v. MSX and Jorge Lopehandia to date" as stated in the December 16, 2015 letter to MSX from the BCSC.
It has been confirmed by the Chilean courts that the plaintiff from 2001 to 2017 is Jorge R. Lopehandia. Mr. Lopehandia and MSX have been libelled by Barrick in Canada and Chile by issuance of incorrect press releases.
In Chilean Civil Court Role #C-029407, the judge decided that the asset is in Chile, therefore all parties are subject to Chilean Law.
The BCSC and ABX personnel shall be ordered to stand trial to resolve accusations from Mr. Lopehandia and Mr. Torres regarding specific evidence. This evidence entered by Mr. Lopehandia and MSX lawyer, Mr. Torres, was accepted in court as legally binding against the above named defendants.
Attached are the 21 pages of plaintiff evidence accepted, as is, by the Chilean court against the BCSC and ABX.
On behalf of the Board of Directors,
“Brent Johnson”
Brent Johnson
President & CEO
For further information, please contact Mr. Steve Holt, Director of Mountainstar Gold Inc. at steveholt@telus.net.

Mountainstar Gold Inc. is issuing this update with regard to its joint venture with Jorge Lopehandia in Chile. The following is information received from the company's Chilean lawyer, Juan Guillermo Torres Fuentealba.

Ms. Emery has been criminally charged in compliance under the Chilean Penal Code, sections 111-112-113. Judge Freddy Antonio Cubillos Jofre of the Seventh Court of Guarantee of Santiago (Penal Process Court) accepted the charges from jurist Mr. Torres on Mr. Lopehandia's behalf, and these charges have been served to Ms. Emery.

Ms. Emery is also charged criminally for falsification of the Pascua Lama protocol and malicious use of the same in a separate action before the court Fiscalia Centro Norte de Santiago.

CHILE HAS SPOKEN ON PASCUA TITLE IN 2012

Mountain-West Resources Inc.'s counsel in Chile has delivered a certificate of dominion (at this date in 2012) for the Pascua area in Chile. Barrick acquired the property from Lac Minerals when it took over Lac in 1994.

A certificate of dominion allows the holder mineral, water, mining and access rights. In this case, it is for gold, silver and copper. The ownership of the Pascua areas is in the name of Jorge Lopehandia Cortes and are unencumbered.

The TSX Venture Exchange previously halted the trading of the company in April, 2011, for almost three months and protected Barrick Gold despite documents provided.

The company invites Barrick to surrender Pascua or produce certificates of dominion currently dated on the Tesoros claim group and Los Amarillos 1-3000.

RACKETEERING AGAINST THE FITZGERALD LIVING TRUST, FITZGERALD WAS FORMERLY KNOWN IN THE INDUSTRY AS "MR. BARRICK" ABX

Mountain-West Resources Inc. has filed a racketeering lawsuit against three parties in the Superior Court in Pima County, Ariz. This lawsuit names, at the moment, the Living Trust of Michael Joseph Fitzgerald, his Executrix and widow Marisa Fitzgerald and one other geologist.

Mr. Fitzgerald was a geological engineer and was the co-founder of our Company with an attorney from Texas. The Company was incorporated in British Columbia in 1971 and became publicly traded on the old Vancouver Stock Exchange in August, 1974. We filed an action in the Supreme Court of BC against Mr. Fitzgerald and others on March 19, 1999, namely Action #C991486.

Through our litigation agreement in the United States, we filed a claim against Michael Fitzgerald's Goldstrike Trust in Washington State in December, 2010. Mr. Fitzgerald passed away on August 11, 2009. Our claim is in the amount of one billion five hundred million dollars ($1,500,000,000).

Some time since forming the Washington State registered Goldstrike Trust, Mr. Fitzgerald transferred the trust to Arizona and transformed it into a Living Trust.

Through our Arizona attorneys, it was determined that litigation in the United States was still open to us. The Supreme Court of British Columbia's dismissal of our lawsuit in 2005 against Michael Fitzgerald and others was ended for procedural reasons. The Company did not lose the case in court on the merits. We lost because we were not allowed "our day in court".

More to be added at another time.

*******THIS IS A SPECULATIVE STOCK.  IF YOU ARE NEW TO INVESTING AND OR HAVE LIMITED KNOWLEDGE ABOUT THE RISKS OF INVESTING IN TSX VENTURE, CNSX & OTC STOCKS IT IS HIGHLY RECOMMENDED THAT YOU DO YOUR DUE DILIGENCE/SEEK ADVICE BEFORE INVESTING.*******