NYBob
08/29/11 2:42 AM
Whitleblower Releases Video Of Missile Hitting Pentagon On

Rothschild World Part 3 "All Enemies both Foreign and Domestic"

* Number of firefighters and paramedics killed: 343

* Number of employees who died in Tower Two: 614

* Number of nations whose citizens were killed in attacks:
115

* Number of people who lost a spouse or partner in the attacks: 1,609

* Estimated number of children who lost a parent: 3,051

* Percentage of Americans who knew someone hurt or killed in the attacks: 20

* Number of firefighters on leave for respiratory problems by January 2002: 300

* Days fires continued to burn after the attack: 99

* Point drop in the Dow Jones industrial average when the NYSE reopened: 684.81

* Total number of hate crimes reported to the Council on American-Islamic Relations nationwide since 9/11: 1,714

* Number of apartments whose residents have requested cleanup and testing: 4,110

* Number of Americans who changed their 2001 holiday-travel plans from plane to train or car: 1.4 million

* Estimated number of New Yorkers suffering from post-traumatic-stress disorder as a result of 9/11: 422,000 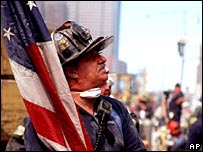 They released a video claiming that failures -
by the then-mayor of New York led to the deaths -
of 121 men.

The video says Mr Giuliani failed -
to provide working radios for crews -
and halted the recovery effort too soon.

It also accuses the former mayor of failing to provide
working radios for firefighters, saying it made it
impossible for them to learn that the Twin Towers
were about to collapse.

"Virtually the whole thing goes back to him with the radios,"
Jim Riches, a fireman whose son was killed on 9/11,
says in the footage.

"He's the guy on the top, and he's the guy you yell at.
He takes the hit. And my son is dead because of it."

The video - which also offers testimony from
other firefighters and their relatives -
says Mr Giuliani is exploiting the disaster as -
a theme for his presidential candidacy?

keeping it as simple as possible?
Who or what group/s of people do you think pulled it off?

isn't that nice to collect? -

instead of class action lawsuits from 10000's of workers -
who been exposed to asbestos and got cancer? -

An action would have wiped out the owners fortune? -
with class action law suits from good lawyers? -
representing 100s of genius 888CEO's in the IT-fortunes
companies? -
make your own dd....ex....

How did the government treat rescue personnel and EMT's
who courageously searched for survivors and victims
after the attack? -

Combines footage from CNN's "America Remembers" tribute
to the victims of September 11
with the Neil Diamond song
"September Morn."

Instructions For Signing The Petition

Two petition forms are available for download: the single-signature form, and the 3-signature form if you would like to join in the effort of gathering signatures.

2. [Note: Your name and address should appear exactly as it is on your voter registration form.] Using blue ink, on page 1 sign your name on the top line of the left side, then neatly print your name right below that. Then neatly print your street address with apartment number on the top line to the right, and your borough and zip code below. Lastly print your county on the far right and date on the far left (Counties: Manhattan is "New York", Bronx is "Bronx", Queens is "Queens", Brooklyn is "Kings", Staten Island is "Richmond"). Then sign on page 2 and 3 in the signature line at the bottom of the page. For your signature to be valid pages 2 and 3 must be signed.

3. Have your witness sign the witness statement at the bottom of page 1, including his or her full registered address, and his/her county in the blank at the bottom.

4. Follow the same steps for the person witnessing your signature.

2. Print out as many forms as you can get your family, friends and fellow New Yorkers to sign (each form holds the signatures of three individual signers).

3. Using blue ink, on page 1 have each signer sign his or her name on the top line of the left side, then neatly print his/her name right below that. Then neatly print his/her street address with apartment number on the top line to the right, and the borough and zip code below. Lastly print his/her county on the far right and date on the far left. Then have each signer sign on page 2 and 3 on the corresponding signature lines at the bottom of the page. Pages 2 and 3 must be signed by each of the signers for each signature to be valid.

4. You sign the witness statement at the bottom of page 1, including your full registered address, and your county in the blank at the bottom.

Note: The form does not have to be filled out by three separate signers for it to be valid. You can mail in a form that has only one or two signers.

In God We Trust -