bunky
11/25/21 9:16 AM
What would be your estimate for meaningful production/revenue

Standard Lithium chose south Arkansas as a key development target due to its very large resource potential, with a well-studied and documented brine deposit. Combine this with a pro-business environment, a region with more than five decades for commercial brine production, the associated infrastructure; pipelines, well fields, low-cost power, road, rail and a highly skilled work force. This makes Standard Lithium’s south Arkansas project the perfect location for a modern lithium chemical company. 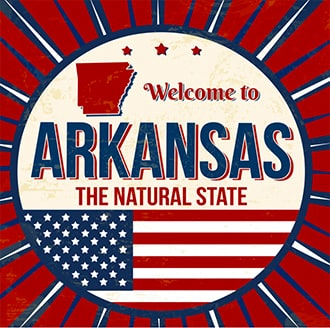 El Dorado is located approximately 120 miles (190 km) from the state capital of Little Rock. The city was the heart of the 1920s Arkansas oil boom. During World War II, it became a center for the U.S. chemical industry, which still plays a key part in the local economy, as do oil and timber.

The region is home to North America’s largest brine production and processing facilities.

When oil was discovered in south Arkansas in 1921, oil field brines were considered a worthless by-product of oil producers who had problems disposing of the brine. Then, chemists from the Arkansas Geological Commission (now the Arkansas Geological Survey) discovered that the Smackover Formation brines had high bromine content—seventy times greater than that of ocean water. Bromine production followed oil production in Union County in 1957 and has continued ever since. Bromine production in Union and Columbia counties contributes significantly to the local and state economy and employs over 1,000 people. Great Lakes Chemical Corporation built the world’s largest bromine plant in south Arkansas in 1961. Great Lakes Chemical Corporation merged with Crompton Corporation in 2005 to create Chemtura Corporation. Chemtura Corporation was acquired by global specialty chemical company Lanxess AG in 2017. Lanxess operates three brine processing plants in south Arkansas. 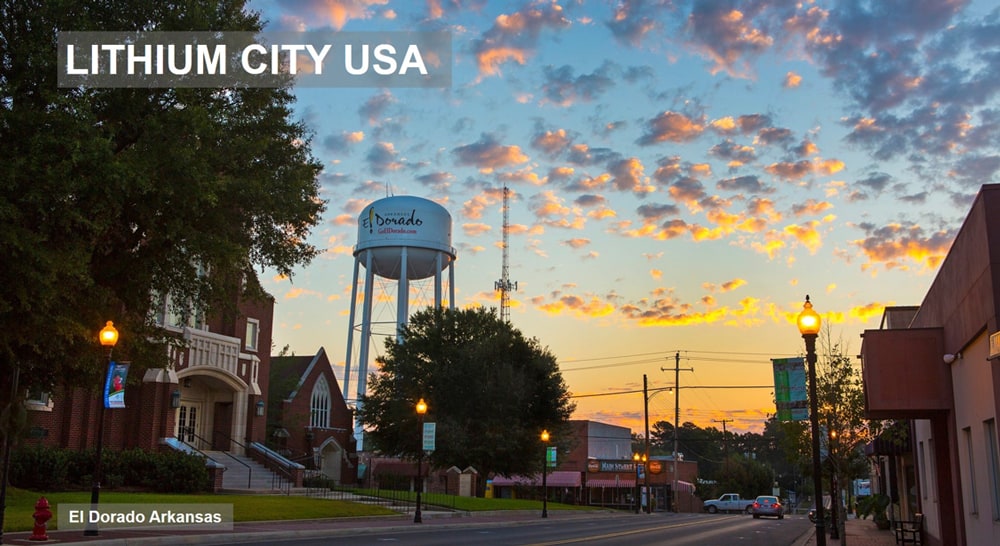 Lanxess operations in south Arkansas cover 150,000 acres that includes10,000 brine leases. Lanxess extracts brine from their wells located throughout the area, and the brine is transported through a network of 250 miles of pipelines to three plants where the brine is processed for bromine recovery with the tail brine then re-injected to the aquifer. The three bromine extraction plants currently employ approximately 500 people, have been in production for nearly five decades, and produce roughly 5.3 billion gallons of brine annually.

A Preliminary Economic Assessment prepared by Advisian, a consulting arm of Worley Parsons, released June 18, 2019 considers the production of battery-quality lithium carbonate through a phased build-out to a total 20,900 tonnes per annum (tpa) from the contemplated joint venture with Lanxess AG at their three-operating bromine-processing plants.

Notes:
All model outputs are expressed on a 100% project ownership basis**
[1] Total production, using existing brine supply rates at the completion of Phase 3
[2] Plant operation commences upon completion of Phase 1
[3] Includes 25% contingency of both direct and indirect capital costs
[4] Includes all operating expenditures, including sustaining capital and allowance for mine closure
[5] Selling prices ranging between US$10,840-16,260/tonne were modeled as part of sensitivity analysis 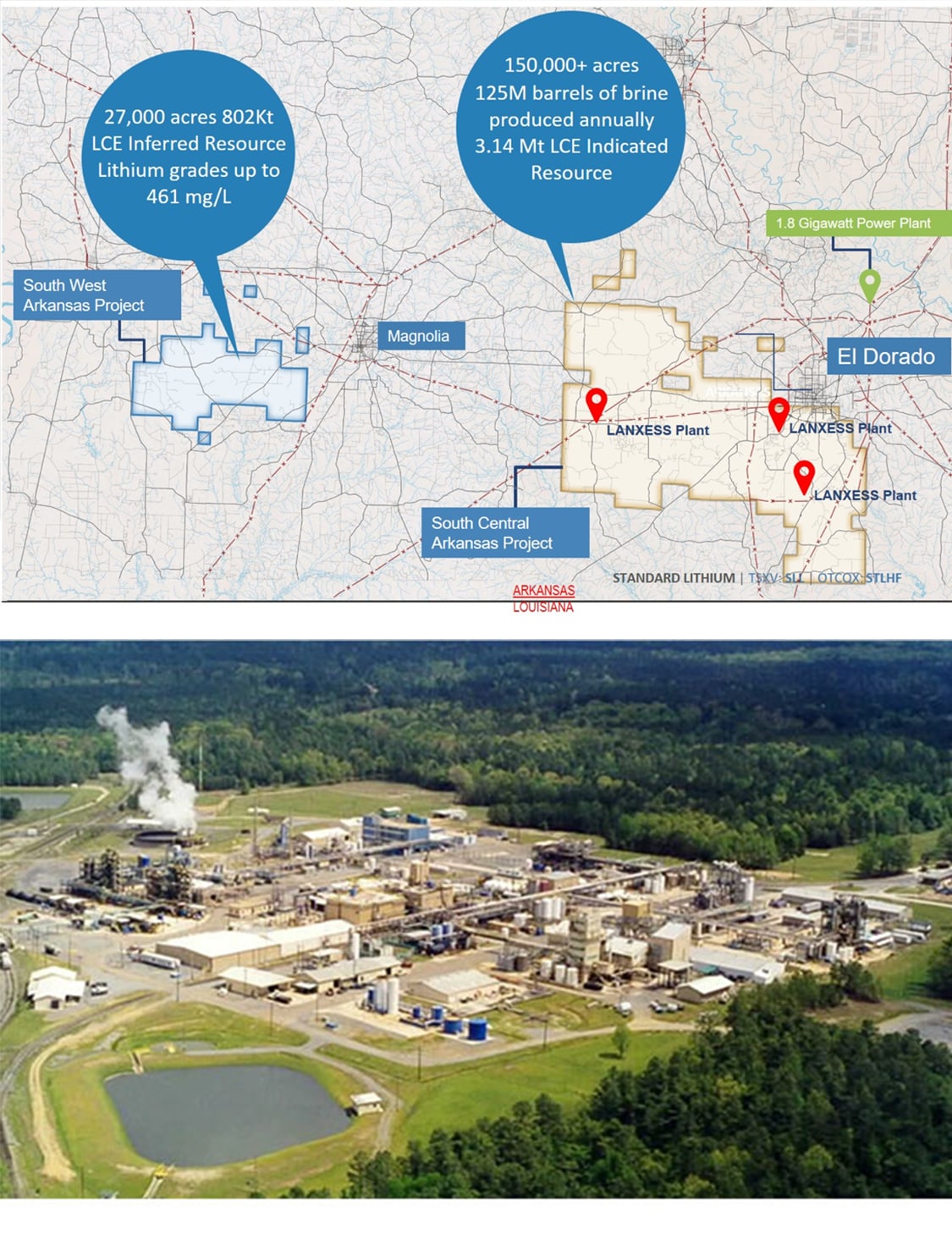 Standard Lithium has an option agreement with NYSE listed TETRA Technologies Inc. to acquire the rights to conduct exploration, production and lithium extraction activities on 27,262 acres of brine leases located approximately 40km west of the Lanxess project. This is in an area where the Smackover Formation is known to be highly productive. The TETRA Project lithium brine Inferred Resource, as reported, is contained within the Upper and Middle facies of the Smackover Formation, a Late Jurassic oolitic limestone aquifer system that underlies the entire property. This brine resource is in an area where there is localized oil and gas production, and brine is produced as a waste byproduct of hydrocarbon extraction.  The data used to estimate and model the resource was gathered from active and abandoned oil and gas production wells on or adjacent to the property.

Lafayette Counties in southwestern Arkansas. The property consists of 11,033 net hectares (27,262 net acres) leased by TETRA, and the resource estimate was only modeled for that footprint.

Notes:
[1] Mineral resources are not mineral reserves and do not have demonstrated economic viability.  There is no guarantee that all or any part of the mineral resource will be converted into a mineral reserve.
[2] Numbers may not add up due to rounding.
[3] The resource estimate was completed and reported using a cut-off of 50 mg/L lithium.
[4] The resource estimate was developed and classified in accordance with guidelines established by the Canadian Institute of Mining and Metallurgy.  The associated Technical Report was completed in accordance with the Canadian Securities Administration’s National Instrument 43-101 and all associated documents and amendments.  As per these guidelines, the resource was estimated in terms of metallic (or elemental) lithium.
[5] In order to describe the resource in terms of ‘industry standard’ lithium carbonate equivalent, a conversion factor of 5.323 was used to convert elemental lithium to LCE 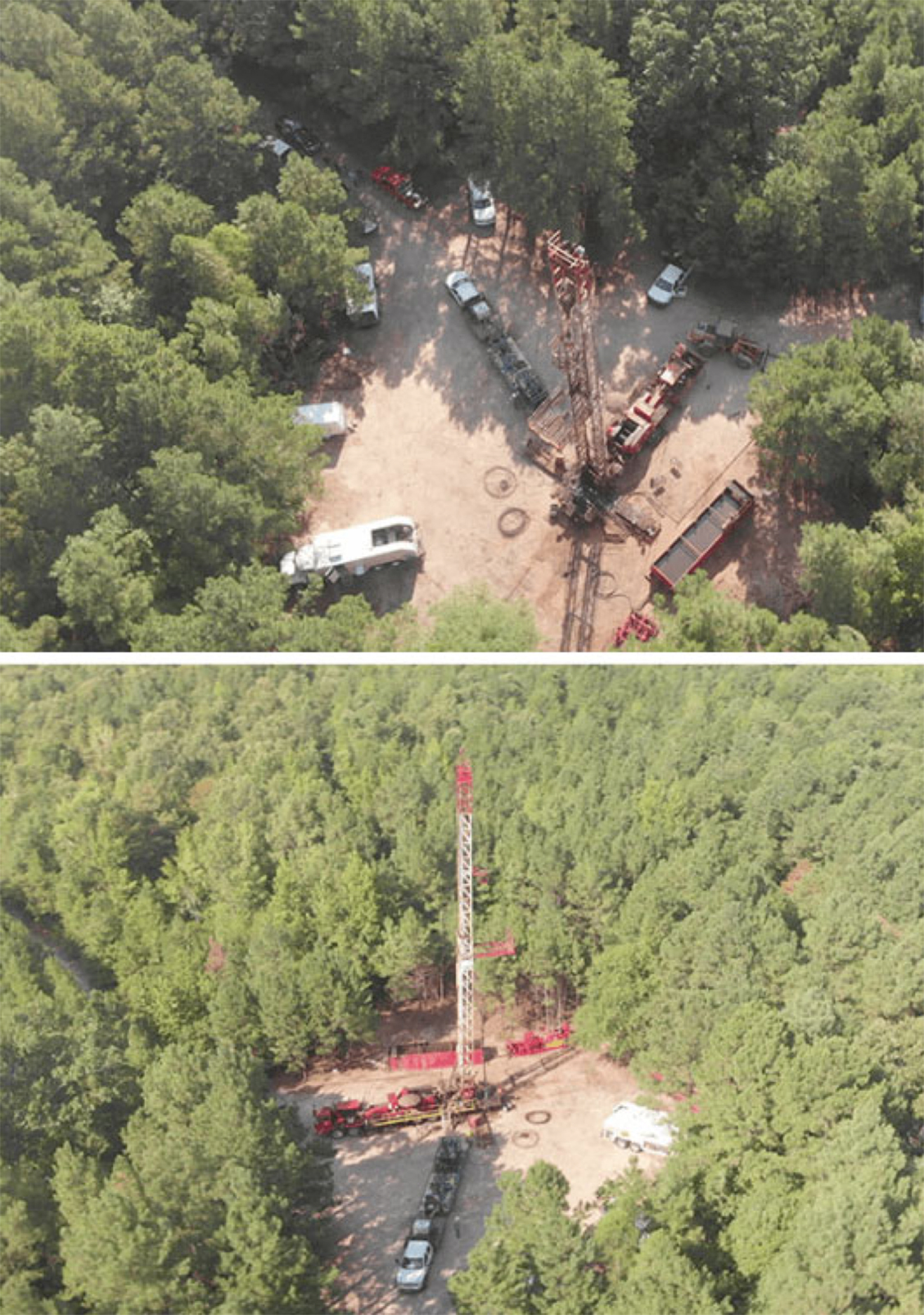 In the conventional process for lithium extraction from brine, the lithium-rich salt water is pumped to the surface and deposited into a series of massive ponds that occupy many thousands of acres where passive solar evaporation occurs. This process can take anywhere from eight months to greater than a year. After the water has evaporated, and other minerals have been precipitated out through the addition of chemical reagents, the remaining lithium enriched solution is transferred to a plant where additional unwanted elements are removed from the solution.  It is then chemically treated to create the final product of lithium carbonate, or further processed to lithium hydroxide. This entire process involves pumping millions of gallons of brine per day to the surface in some if the driest and most fragile eco-systems, the process is also very inefficient with lithium recoveries of roughly 50%, leaving much of the precious material unharvested. The removal of massive volumes of brine can also impact nearby freshwater aquifers exacerbating existing water shortages, and the evaporation process leaves huge salt tailings piles.

A new, modern approach to how we extract and process critical minerals like lithium is overdue.

For the company’s south Arkansas projects, Standard Lithium has developed a proprietary process called “LiSTR” that uses a solid ceramic adsorbent material with a crystal lattice that is capable of selectively pulling lithium ions from the “tail brine” or waste brine after it has gone through the bromine-extraction step. The ceramic adsorbent materials are mounted in stirred-tank reactors that contain the tail brine. In the second step, the adsorbent releases the lithium for recovery.

The Li-extraction process (diagram) takes advantage of the fact that the brine leaves the bromine process heated to approximately 70°C. This means that no additional energy is required, and the reaction kinetics for the adsorption are suitable. The process can reduce the time required for Li extraction from months (with the evaporation ponds) to hours and is capable of producing a high-purity LiCl solution for further processing in the battery industry. The Li-extraction operating as a “mini-pilot” project has run continuously for a number of weeks utilizing raw tail brine from the project and a larger modular industrial scale Demonstration Plant is expected to be deployed at Lanxess’ southern processing plant in the fourth quarter 2019. 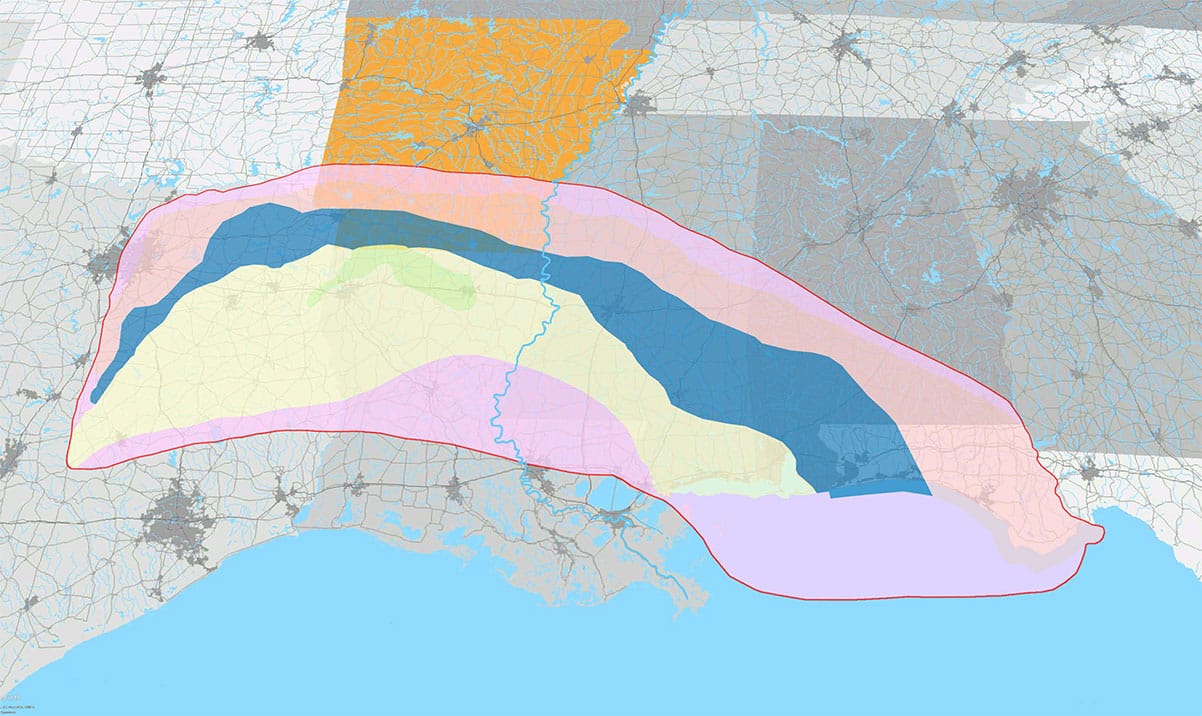 The Smackover Formation is an extensive porous and permeable limestone aquifer that hosts huge volumes of mineral-rich brines, as well as hydrocarbons. The Smackover Formation brines are one of the largest source of bromine in the world, but the brine also contains significantly elevated levels of lithium – typically ranging from 150 to 500 mg/L. Several dozen wells pump out brine and send it via pipeline networks to process plants. Once minerals have been extracted the waste brine (tail brine) is re-injected back into the  Smackover Formation aquifer.

Average annual brine production between 2010 and 2016 is estimated at 42.6 million m3 (9.4 Billion US Gallons) from Arkansas Oil and Gas Commission data. Presently, bromine is recovered from brines in Columbia and Union Counties mainly by Lanxess and Albemarle Corporation. 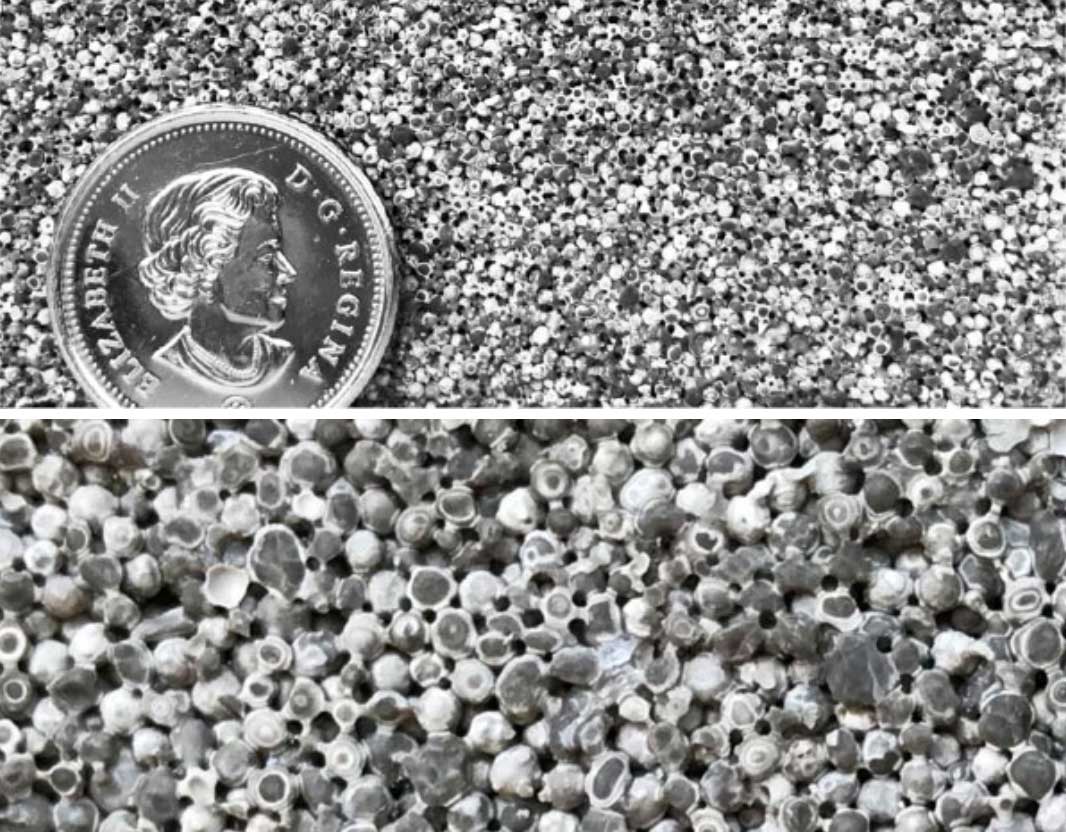 Southern Arkansas is a business-friendly jurisdiction with a decades long history of operating chemical, oil & gas, forestry, and manufacturing industries. The region’s hydrogeology is well-documented, the large existing commercial brine production brings a significant infrastructure investment along with access to low-cost power, water, and a skilled workforce.

Standard Lithium is in a unique position to leverage the existing brine production to fast-track the projects commercial development with the aim of building the first new U.S. lithium project in over five decades. 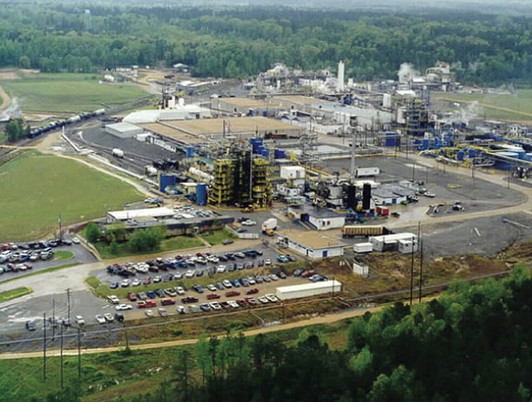 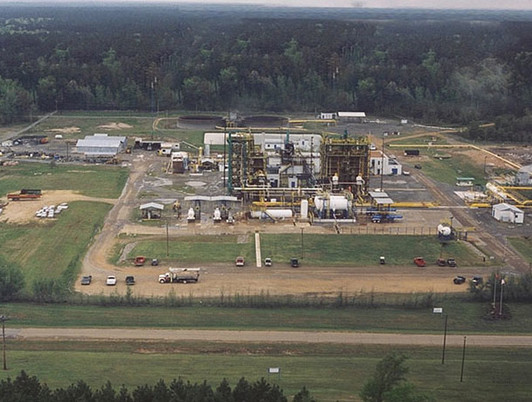 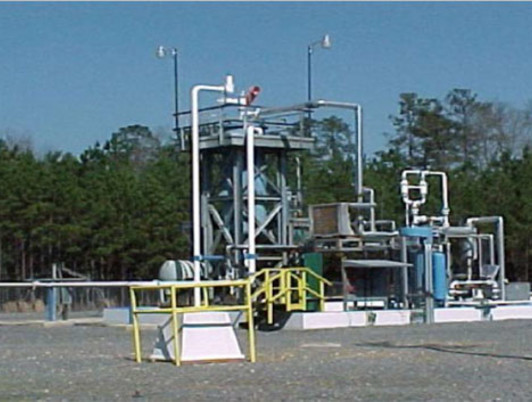 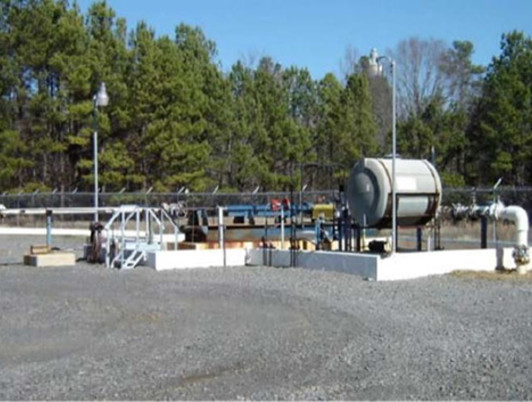