Cirque Energy Inc. strives to be the acknowledged industry leader in the development of sustainable energy projects.  Cirque is an integrator of renewable and clean energy processes specializing in the development, verification, and implementation of technologies dedicated to conserving our natural resources and minimizing the negative impact on the environment.  In line with the company’s vision statement, we will achieve our goals by challenging the mind-sets and principles of the traditional thought processes relating to waste, waste management, and creating energy from clean or alternative fuels.  Our environmentally sustainable projects will deliver positive results now and for the foreseeable future; Right for now, and Right forever. 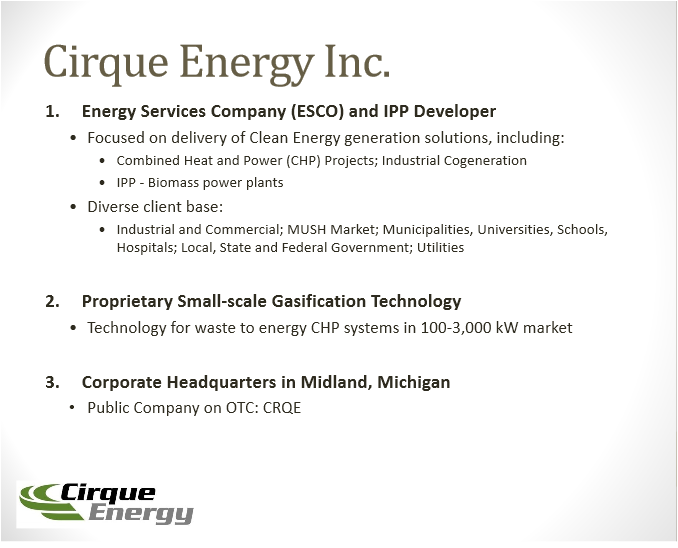 Cirque Energy Inc. is working to acquire or develop independent power plants in the biomass and waste to energy sector.  Our goal is to own and operate facilities where we can use our expertise with complex energy systems in a manner that enhances the economic, technical and environmental performance of biomass facilities.
Cirque Energy and/or its Principals were previously either the Owner or Operator of the following facilities, representing a combined 170 MW of biomass power experience: 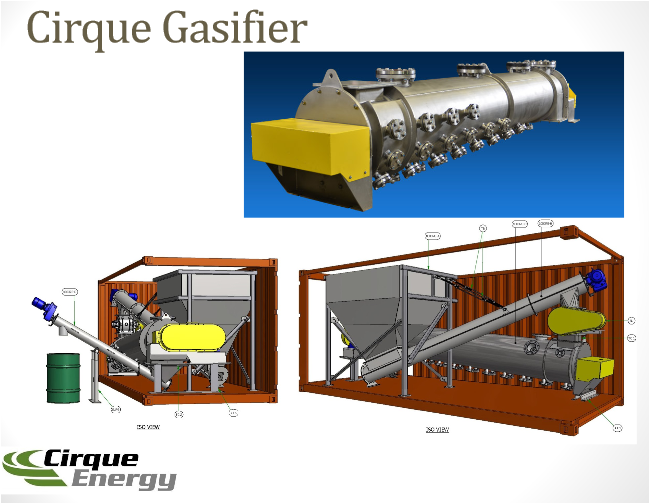 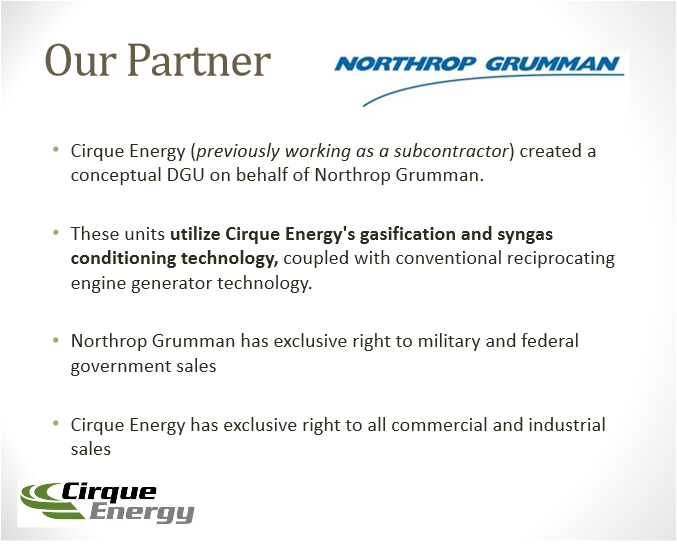 June 10, 2014 - Cirque Energy, Inc. (OTC:EWRL), announced the signing of a development agreement for a project to install a 2.5 megawatt (MW) biomass gasification power plant to be known as the Midland Biomass Energy Station (MBES) in Midland, Texas. The project will be developed in conjunction with ReCom Operating Partners, a Midland urban wood waste recovery and recycling operation. Cirque Energy will install, operate and maintain the plant, which is expected to be operational by the end of the first quarter of 2015. The MBES will sell the renewable electricity generated by the project through the deregulated Texas utility market under a multi-year power purchase agreement.


!! I would advise all to research the backgrounds of said individuals thoroughly!! 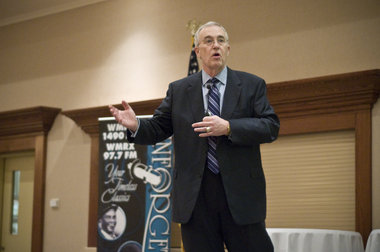 1982 -  Silverthorn began development of Grayling Generating Station, a 36.2-megawatt, $70-million project located near the town of Grayling in northern Michigan. The key   challenge was obtaining regulatory approval of the power contract in a convoluted environment where Primary Power had to compete with 25 other projects for capacity allocation, a five-year process. Grayling Generating Station was put into commercial operation in August 1991, and in 2001 it received the Michigan Department of Environmental Quality’s Clean Corporate Citizen designation for environmental compliance. In 1993 it received the prestigious Power Magazine Power Plant Award for application of fresh ideas and new technology to minimize environmental impact and maximize efficiency. The project was cited as an outstanding example of a power plant harmonious with its host community. This was the first of such. In 1996, the Hillman Plant came operational as others. Let's jump into the next decade for better review. Please read all of the reference links provided.

2000-2001 - In late December of 2000, Silverthorn approaches Drayton Valley Power Ltd for the acquisition of the Drayton Power Income Fund(DVA.UN-TSE). It included a 15.0 megawatt (MW) hydroelectric facility located near Innisfail, Alberta; a 17.0 MW biomass-fired facility located near Westlock, Alberta (Dapp Generating Station); a 7.5 MW biomass-fired facility located near White River, Ontario (White River BioMeg); and a 12.0 MW biomass-fired facility located near Drayton Valley, Alberta(Valley Generating Facility). In late April(announced April 26) of 2001(after delays), the agreement was terminated, and the fund was seeking damages against Primary Power of Western Canada(Silverthorn). Two months later, on July 1st, Algonquin Acquisition Inc., a subsidiary of Algonquin Power Income Fund, completed a takeover bid for all outstanding units of Drayton Valley Power Income Fund for around $63,000,000. They in turn kept the hydroelectric generating facility and a 50% interest in Drayton(Primary power held the other 50%), with Primary Canadian Funding Company(Primary Power) acquiring the other facilities. The financing for Silverthorn was provided by "Trust Company of the West"(you should know who that is). See how that works?.

2007-2008 - After divesting several of the plants in earlier years, before the entire market crashed, Silvertorn divested the remaining five plants to Foristar. Two of the plants(business docile in Canada) were craftily transfered to Calgary-based Verdant Energy, where Silverthorn became a director. From a transcript: In 2007, White Plains, New York-based, Fortistar acquired full ownership of Dapp Power, located about 130 kilometres north of Edmonton, with its purchase of Calgary-based Verdant Energy. It also acquired 50 per cent ownership in Valley Power in Drayton Valley, Alberta, which also uses woody biomass as its fuel. The full commitment is referenced in this transcript: Fortistar, a White Plains-based power company, has an agreement to buy interests in five biomass projects from Primary Power International. Fortistar said the acquisition is part of its plan to expand its green and renewable energy portfolio. The acquisition is expected to close in about thirty days. Three of the projects are in Michigan: the Hillman Power Co., the Grayling Generating Station and the Genesee Power Station Two are in Alberta, Canada: the Dapp Generating Station and the Valley Generating Facility.

2009 - Cirque Energy is formed in August. Thomas G. Cote is the sole member.

2010 - Dow Corning announced in August that it is considering a $100,000,000 Biomass plant. Cirque energy was to build/own/operate such. Cirque was noted as already have filed the permits for such, a six month projection for granted permits.

2011 -In late 2011, Cirque Energy pulls out of the Midland Project(DOW) citing delays(I would suggest that, as well as foresight). They sell the project to VC Energy(Houlihan Capital), and VC proceeds with it with DOW until it is terminated in late 2012 due to market uncertainties. It is important to note here that the Dow Chemical plant has recently shut down(partially) and laid off 2400 workers in October 2012.

2013(march) - Silverthorn is appointed as CFO in March, reverted back to February.

Roger W. Silverthorn (Power plants built by him as well as acquired by him.  He was a developer, owner and operator)
CRQE Chart
Watchin,,,for Break Above .001 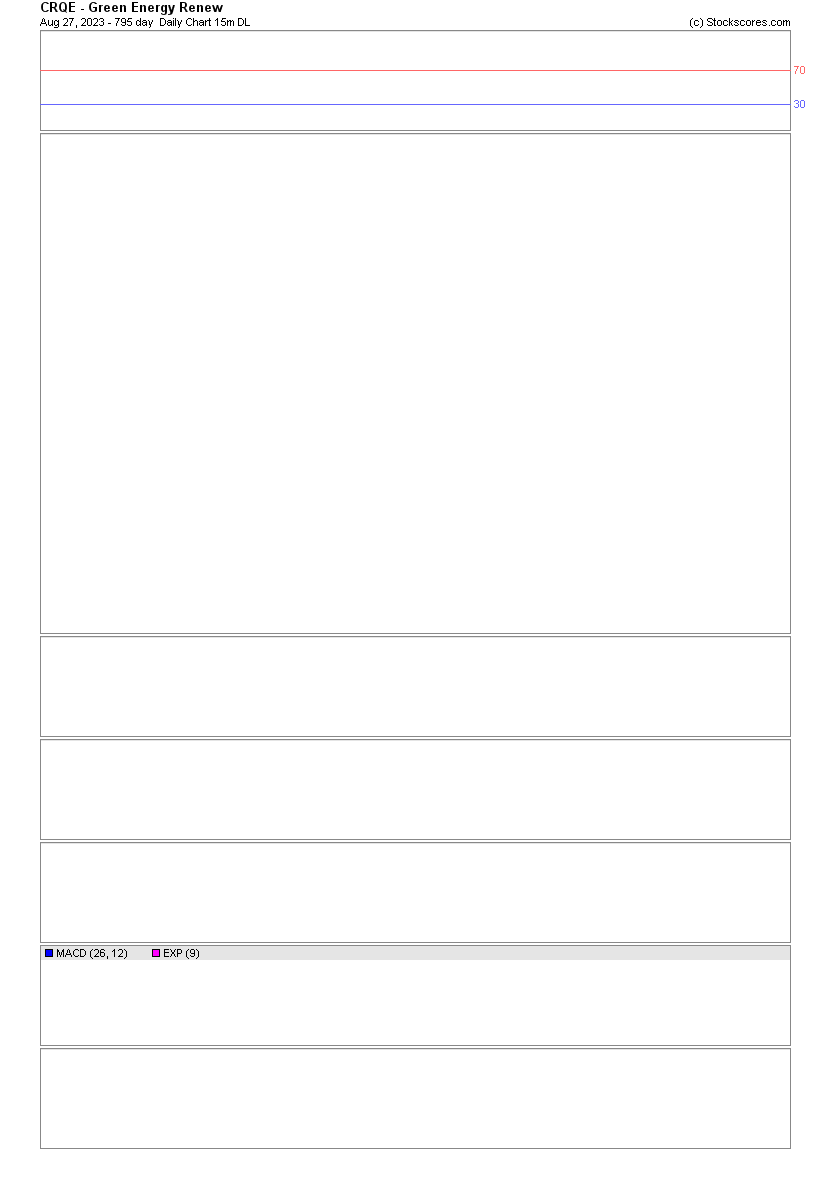