scaryharrysafari
10/02/21 10:21 AM
Unfortunately, the only solution to wack jobs such

jason sundar
03/31/21 5:05 PM
Needs smth, MexicoMike is the only somebody writing
Older

In early 2013 Tgk. Anwar, the chairman of the Aceh Government's Spatial Planning Committee, claimed that the Ministry of Forestry has accepted "almost 100 percent" of the province's new spatial plan, which would zone large blocks of previously protected forest for mineral extraction, timber concessions, and oil palm plantations. Aceh has the most forest cover of any province in Sumatra, which lost 36 percent of its forests in the past 20 years. The new spatial plan would grant nearly one million hectares of land for mining, 416,086 for logging, and 256,250 hectares for palm oil. The plan would also approve an extensive new network of roads that would run through protected forests.

The company is working closely with government officials in the country and have company representatives on the ground in Aceh to obtain reclassification of the forestry zone from "protected forest" to "production forest." East Asia Minerals has implemented a new Corporate Social Responsibility program and hired ex-government officials to help them with these efforts.  The company is undergoing a valuation study to define its current status and options on reclassification. The nature of the ore body and the limited scope of the valuation study preclude this assessment.

Once forestry designation has been reclassified, the company will be granted the ability to continue the drilling program with the goal of expanding the resource at Miwah. While waiting for reclassification, the company will be able to assess mineralization and prepare East Asia Minerals to conduct a feasibility study. Miwah is not currently included in this reclassification. The length of this process is primarily due to dealing with a coalition of environmental groups, and NGOs. 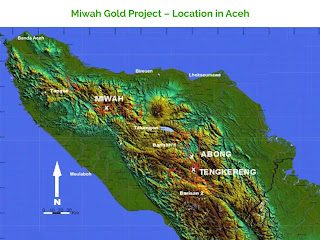 East Asia Minerals is an Asian-based, Canadian mineral exploration company with gold and copper exploration properties in Indonesia. The Company has a 70 to 85 percent interest in three advanced gold and gold-copper properties located in Aceh Province, Sumatra, and Sangihe Island, North Sulawesi. The company's Miwah project in Aceh Province has an NI 43-101 compliant inferred resource of 3.14 million ounces of gold and 8.95 million ounces of silver. This is based on an estimated 103.9 million tonne resource averaging 0.94 grams per tonne of gold and 2.68 grams per tonne of silver using 0.20 grams per tonne gold cut-off. East Asia Minerals' shares are listed for trading on the TSX Venture Exchange under the symbol "EAS".

Check out the new web site