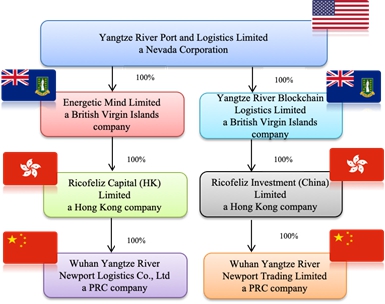 Mr. Xiangyao Liu (CEO)
Mr. Xiangyao Liu, male, aged 44, was born in Hebei Province, China, who is living in Hong Kong currently. He graduated from Business Management stream of the Hebei Institute of Finance in 1994.
Mr. Liu served in the state-owned Materials Bureau of Hebei Province and engaged in steel and other logistics trading between 1994 and 1996. From 1996 to 2003, he invested and established the Pacific Trade and Logistics in China, served as the General Manager, and engaged in the trading and logistics of steel, agricultural products and other commodities.
In 2010, Mr. Liu participated in the investment of Wuhan Renhe Group (which held the Wuhan Huazhong Steel Trading Center Co., Ltd. at that time), supervising logistic and trade of steel. He also starts to engage in financial and security investments in Hong Kong from then.
From 2012, Mr. Liu served as Deputy General Manager of the Wuhan Huazhong Steel Trading Center Co., Ltd. (which is restructured and became the Wuhan Yangtze River Newport Logistics Co., Ltd.). He supervised the transition of the Steel Trading Center to an office and apartment complex which supports the warehouses and docks, planned program to bring the Steel Trading Center into the Yangluo Comprehensive Bonded Zone and Pilot Free Trade Area in Wuhan; hosted feasibility study of Wuhan Yangtze River Newport Logistics Center and formulated the "Feasibility Study"; carried out Collaborative research with the government and developed the " Design of Yangluo Newport Pier "; directed restructuring, overall planning and business management of the company.
On December 19, 2015, Mr. Xiangyao Liu served as Executive Director & CEO of Yangtze River Development LTD. He holds 53.17% of Yangtze River Development LTD's shares

Yangtze River Port & Logistics Limited (hereinafter referred as "YRIV"), is a Nevada corporation that operates through its wholly-owned subsidiary, Wuhan Yangtze River Newport Logistics Co., Ltd., a non-state-owned logistics and port management company focused on helping its clients from all over the world, enter Wuhan Yangluo Comprehensive Bonded Area and Pilot Free Trade Area by providing a comprehensive range of services covering office space, professional logistics, bonded logistics, waterways, railways, road transport, collection and distribution, storage and processing, information processing, trade flows and logistics finance (the "Wuhan Company").
One of the main projects of YRIV is The Wuhan Yangtze River Newport Logistics Center (the "Logistics Center"), which is an extensive complex that is located in the Hubei Province of The People's Republic of China, a major transportation hub, with dozens of railways, roads and expressways passing through the city of Wuhan and connecting to major cities in Mainland China, with connections to international centers of commerce and business.
The Logistics Center occupies a total of 2,877 Mu (Mu=666.66 square meters) with a designation and construction period of five years. It is located in Wuhan Newport Yangluo port, on the Yangtze River north, close to the northern base of WugangJiangbei. The distance between Wuhan Guan and the wharf engineering is about 26.5km, downstream and about 5.5km from theYangluo Yangtze River Bridge.The Port operations area has a coastline of 1,039 meters, and is built up with eight 5,000-10,000 tons berths of which 2 are multi-purpose berths, 6 are miscellaneous berths; with an annual design throughout of 5 million tons, including container areas of 100,000 TEU / year (including 2 freezers areas of 10,000 TEU).
Within the Logistics Center, functional area will be divided into six operating zones which include a port operation area, a warehouse and distribution area, a cold chain logistics area, a rail loading area, an exhibition area and commercial zone. The port is constructed of container yards, yards for groceries, warehouses, multi-functional warehouse and production facilities such as roads, raw and auxiliary areas, gas stations, parking, water, electricity and other auxiliary production facilities complete with appropriate equipment.
Aside from being included in the Comprehensive Bonded Zone, Yangluo development area is amongst the third batch of China Free Trade Area applicants to submit FTA applications to the State Council through the Wuhan government for approval. So far approvals have been granted to Shanghai, Tianjin, Guangdong and Fujian. The approvals allow for implementation of free trade areas in which the participating enterprises are entitled to a series of favorable policies benefiting their business.
YRIV has signed an agreement to rent 1.2 million square meters of land on a long term basis for building logistics warehouses covering 400,000 square meters in support of the new port. The warehouses comprise port terminal zones, warehouse logistics zones, cold chain food zones and railroad loading and unloading zones. The warehouses, once constructed, will connect the port terminal and the railway as partof the "One Belt, One Road" policy. It will also support big scale logistics firms in Wuhan and other provinces that rent the warehouses and terminals and to enter MOUs to purchase offices. These firms intendto make use of the port project to help expand the logistics business from Wuhan to Hubei province in China and to the whole world.
Logistics Center Highlights:
The shipping center of Wuhan is closely linked to China policy to promote the "Yangtze River Economic Belt"
The Wuhan port along the Yangtze River is beingactively applied to becomea "Free Trade Zone"
"Yangluo Comprehensive Bonded Zone" allows the enterprises in the zone to enjoy export tax rebates and the transaction does not levy value-added tax and consumption tax.

Yangtze River Port and Logistics filed a defamation lawsuit in the New York Supreme Court, New York County, against Hindenburg Research, Nathan Anderson, ClaritySpring Securities and ClaritySpring "in response to their coordinated and orchestrated market manipulation scheme to disseminate false, misleading and defamatory content to the marketplace regarding the company for the purpose of inflicting substantial reputational harm on the company for Defendants' own financial gain". The impetus for the action was an unsigned article published on December 6, 2018 through "Hindenburg Research," which accused Yangtze of making fraudulent misrepresentations in its public filings with the SEC or intentionally omitting material information in those filings, laundering money through sham transactions for the benefit of the company's CEO, and being ensnared in a catastrophic liquidity crisis rendering the company worthless. The company claims that it "has suffered a disastrous fallout from Defendants' coordinated attack, resulting in, among other things, reputational damage per se and monetary damages, which the company seeks to redress through its lawsuit".