Central to any successful gas & oil operational endeavor is the ability to maintain superior infrastructure assets while utilizing lean manufacturing techniques. Integral to United Energy Corporation’s corporate mission, is the acquisition of high-return drilling locations where well productivity can be increased through cost-efficiency measures.

This objective is possible because of the substantial experience of UNRG’s Leadership Team, along with an established record of operational safety. The Leadership Team is closely aligned with United Energy Corporation’s Operational Team at every stage of planning, development, and project oversight. This framework provides United Energy with the greatest capability to generate stable cash flows.

United Energy Corporation’s exploration of untapped oil and gas resources is foundational for adding to a growing inventory of integrated assets. With a focus on a combination of strategic facilities and transport access, UNRG is also conscious of offering diversified services, such as our investment in the license to a micronizing technology, while expanding processing and storage capacities.

Productive infrastructure assets deliver stability and a robust mixture of growth-oriented holdings. Long-term fee-based contracts provide a significant expansion opportunity. Along with our trusted energy partners – from leaseholders to contractors to communities – UNRG is dedicated to increasing well productivity and efficiency; a continuing focus on safety; sustainability of revenue; and improve execution performance. 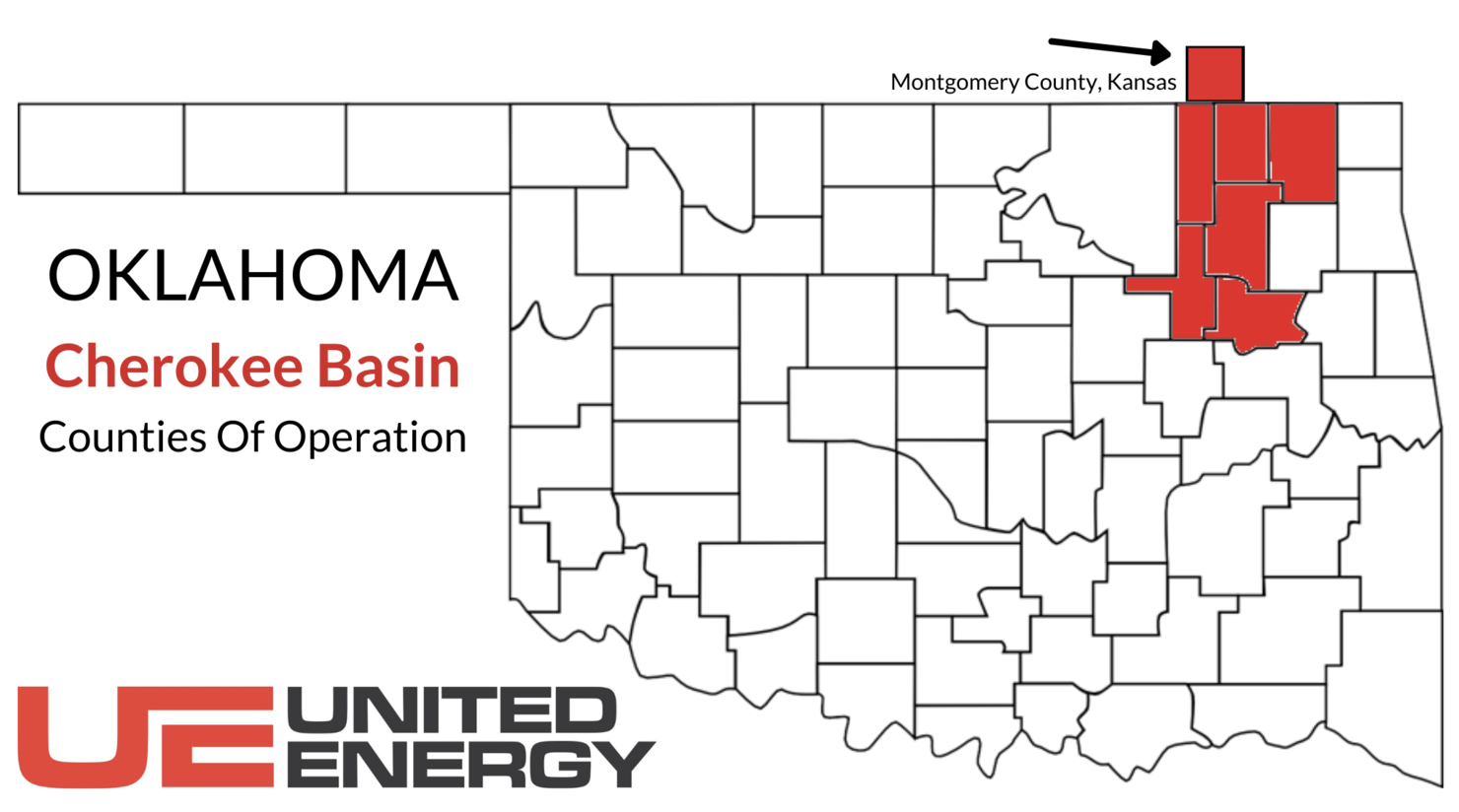 United Energy Corporation acquired holdings located in the famous Cherokee Basin – a rich oil and gas region in northeastern Oklahoma and southeastern Kansas that covers 15 counties. Through this acquisition we have increased our overall footprint in the oil and gas industry and significantly strengthened value for shareholders in UNRG. The oil from this acquisition is sold to a local refinery while the natural gas travels to markets throughout the Midwest via major interstate pipeline systems.

The US Geological Survey’s assessment in 2015 of recoverable petroleum resources in the Cherokee Platform Province areas (which includes the Cherokee Basin) validated United Energy’s decision to pursue this acquisition and increase the breadth and depth of the Company’s assets.

From production sites to end markets, natural gas is transported from one state to another. Compressors provide a boost in pressure every 40-70 miles along the way as needed. An interstate compressor such as the one in Cotton Valley requires 4-5 acres of land. Part of the interstate system is owned by Southern Star that has continuously provided pipeline service for over 100 years. Within America’s heartland, Southern Star owns and operates approximately 5,800 miles of natural gas transmission pipeline and 42 compressor stations.

United Energy Corporation has acquired minority ownership in a storage terminal that, when built, will be a technologically advanced, multi-functional facility. It will incorporate a deep-water ship and barge dock, truck rack, and rail rack. The terminal hub will also store, blend, and distribute oil products at its strategic location. An oil terminal is an industrial site where oil is loaded or unloaded for storage or transportation via pipelines or tankers.

A storage terminal allows companies to purchase and receive oil when the price is low and store it until the price is more favorable. This market strategy of stockpiling oil until delivery offers more control over mitigating financial losses while increasing profits based on rising and falling global oil prices. Storage facilities are also needed in the short term while oil is waiting transport from offshore enroute to delivery locations throughout North America.

However, currently there is a shortage of available domestic storage capacity. As oil and natural gas production increases within our own borders, it is imperative that the US expands its storage capacity as well. United Energy is becoming part of the solution, enabling America to fulfill the goal of becoming less dependent on foreign oil.

United Energy Corporation has recently acquired certain rights in a technology that will revolutionize oil extraction from shale deposits. It’s a technology more economical, more energy-efficient, more environmentally friendly, faster producing, and lower maintenance than traditional methods of oil removal from shale reserves. This micronized technology can extract compounds in seconds and minutes versus hours and days. It reduces levels of emissions and mitigates adverse environmental effects many times over that of conventional processes.

Until recently, removing oil from shale rock focused on crushing, pulverizing, and grinding milling processes using high-impact machines. With this new technology, what is called “resonance disintegration” causes materials to be fragmented from within, maintaining the integrity of the original material. Rapid shock waves, or resonance, are applied in lieu of pressure force. As particles are micronized to a fraction of their original size, not only is the removal of kerogen (the precursor to crude oil) considered “clean energy”, but also the oil yield is significantly greater.

The United States Geological Survey (USGS) Energy Resources Program states that the Eocene Green River Formation of Colorado, Utah, and Wyoming “contains the largest oil shale deposits in the world.” This is about 35% of the known oil shale reserves globally and is considered easily recoverable. At our current oil usage rate, it is estimated that this location can produce enough oil (up to 1.2 trillion barrels) for the United States for the next hundred years.

It’s no small matter, then, that a component of United Energy’s multi-lateral strategy is to capitalize on the technology that will transform production of domestic oil shale deposits. This is good news for our shareholders and our country. Clean. Safe. Efficient. Economical. Scientifically Engineered – Strategically Executed.

US Department of Energy - Pulsewave Research

Brian Guinn - CEO/Chairman
Mr. Guinn oversees and directs the investment strategy for the company’s acquisition and development activities throughout Texas, Oklahoma and Kansas. Mr. Guinn has worked in the oil and gas industry since 2003. He has served as President and Chief Financial Officer for several oil and gas operators. During his tenure, Mr. Guinn has planned and executed the acquisition and development strategy for over 50,000 acres of oil and gas leasehold throughout Texas. In addition, Mr. Guinn has over 14 years in the securities industry and has held positions as President, Chief Executive Officer, and Chief Compliance Officer for two FINRA Brokerage Firms. Mr. Guinn graduated from the University of Texas at Dallas with a Bachelor of Science degree in Economics and Finance.

Rick Coody - Chief Operating Officer
Mr. Coody has over 35 years of energy industry experience including asset acquisitions and divestitures, field operations, project development and field management. He spent his first 14 years in the oil & gas industry working at Schlumberger in the pressure pumping sector, primarily fracking services. He has owned and operated his own oil and gas leases since 2002 and has worked as a consultant for several oil & gas companies in Oklahoma and Kansas, as well as international clients in China, Canada, and Mexico. Mr. Coody has owned and operated his own well service and roustabout company as well as oil field equipment manufacturing, which he sold to Varco in 1998. Mr. Coody has been involved as a consultant or an operator in drilling over 150 oil wells and reworking over 300 wells. In 2004 he founded PEMCO, a petroleum energy management company located in Tulsa, Oklahoma that specializes in oil & gas asset acquisitions, operating oil & gas properties, drilling programs, and project management. Mr. Coody is a lifetime member of the Society of Petroleum Engineers. (SPE 3219239)

Terry Carroll - Chief Technical Officer
Mr. Carroll has over 40 years of experience in the oil & gas industry focusing on the evaluation, acquisition, development and operation of oil and natural gas assets located in Kansas and Oklahoma. He has supervised and provided daily management for oil field operations for numerous public and private energy companies, partnerships, and individual investors. He has been directly involved in drilling and completing thousands of oil & gas wells; constructing, operating, and maintaining hundreds of miles of natural gas gathering pipeline, compression and dehydration facilities; cumulatively producing more than 15 Billion Cubic Feet of gas and over 750,000 Barrels of oil. Mr. Carroll served as President, CEO and CFO of United States Exploration, Inc., a public company engaged in oil & gas exploration, development and operations. During his tenure as president, the Company went from a listing on the "Over the Counter" exchange to a listing on the NASDAQ exchange. The Company was purchased by a private company in February of 2004. Mr. Carroll has a BS degree in Business Administration and Finance from California State University, Hayward.