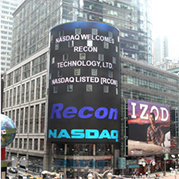 Recon Technology, Ltd. (Nasdaq: RCON) is a leading developer and marketer of automated oilfield services and products that enhance the extraction of petroleum in China. RCON markets these services and products to leading Chinese oil and gas companies, helping them increase efficiency and profitability in exploring, extracting, producing, processing, refining and transporting petroleum products from the nation's largest producing oil fields.

* Recon is an emerging leader in developing and applying the fracturing technology necessary to extract the abundant shale gas reserves in China. Shale, a clean-burning fuel, provides China with a vital and long-sought alternative to the massive toxic pollutants resulting from burning coal for energy production. Working closely with Baker Hughes and other companies, Recon is making rapid progress in liberating these shale gas reserves and facilitating their transport to China's major population centers.

Most oil fields in China, however, have now entered into the tertiary stage of oil recovery, at which oil extraction becomes increasingly difficult and inefficient. Thus, the demands for new technologies to improve oil extraction efficiency and reduce its cost are at an all-time high. Among these technologies is a new generation of real-time automated systems that dramatically increase the efficiency of extracting and refining petroleum products.

China also continues to face a massive and worsening air pollution issue due to a heavy reliance on coal for energy production. One solution could be the development of domestic Chinese natural gas supplies – which are clean-burning -- with shale gas being the most plentiful. The U.S. Energy Information Administration (EIA) recently determined that China has the world’s largest reserves of recoverable shale gas – approximately 1,115 trillion cubic feet. Unfortunately, extracting this gas and transporting it to needed locales has been an exceedingly slow and technologically daunting process. This problem is borne out by 2012 government data, showing 67 percent of China’s power generation emanating from burning coal and only 3 percent from natural gas.

Chinese government authorities, however, are increasing support and funding for technologies designed to facilitate the extraction of shale gas, with the objective of bringing it up to account for at least 8 percent of the nation’s power generation by 2030.

Third Quarter Fiscal Year 2018 Financial Highlights (all comparable to the prior year period):

First Nine Months of Fiscal Year 2018 Financial Highlights (all comparable to the prior year period):

Mr. Shenping Yin, founder and CEO of Recon stated, "Our market expansion efforts proceeded quite well for the past quarter as we continued to extend our furnaces markets to the chemical industry and industrial automation products requirements to coal chemical industry, bringing us increased revenue. We expect this trend to remain stable and we remain confident of a 30% increase in revenue for the whole fiscal year 2018 as mentioned in our annual letter to shareholders. Furthermore, our construction of waste-water and waste oil sludge treatment facilities has also advanced as scheduled. We believe this will help improve our operations and profit in the coming year."

On April 09, 2018, the Company announced procurement bidding results from Shenhua Group Corporation Limited ("Shenhua Group") through Shenhua Logistics Group Corporation Limited ("Shenhua Logistics"), during the first 3 months of FY2018, to provide specified equipment and maintenance services for contracts with amount above ¥6.8 million, or approximately $1.1 million. The Company expects bids of ¥20 million to be achieved for the whole year 2018. As of the date of this press release, ¥9.93 million ($1.58 million) has been secured. Shenhua Group is a state-owed enterprise, founded in October 1995 with the approval of the State Council, pursuant to PRC Corporate Laws. Shenhua Group is a diversified energy enterprise concentrating on coal production, sales, electricity and thermal generation, coal liquefaction, coal chemicals, and railway and port transportation.

On January 22, 2018, the Company and certain institutional investors entered into a securities purchase agreement in connection with an offering, pursuant to which the Company agreed to sell an aggregate of 3,592,500 ordinary shares. The purchase price was $1.66 per ordinary share. The aggregate proceeds, after deducting fees to the Placement Agent and other offering expenses of about $0.5 million, were approximately $5.5 million.

On December 15, 2017, the Company signed a subscription agreement with Future Gas Station (Beijing) Technology, Ltd ("FGS"). Pursuant to this agreement, Recon holds 8% equity interest of FGS. As of the date of this press release, Recon has invested ¥4.0 million in FGS.


BEIJING, July 19, 2018 /PRNewswire/ -- Recon Technology, Ltd. (NASDAQ:RCON), ("Recon" or the "Company"), a China-based independent solutions integrator in the oilfield service, electric power and coal chemical industries, today announced the completion of the first stage of its construction of a comprehensive disposal treatment project (the "Project") in Yumen city, Gansu province through its 51% subsidiary, Gansu BHD Environmental Technology Co., Ltd ("Gansu BHD"), which focuses on oilfield sewage treatment and oily sludge disposal projects. As previously disclosed by the Company, Gansu BHD purchased a 50 year land use right for a 26,235 square meter property to build the Project to serve the oilfield sewage treatment needs of Yumen Oilfield Company, China's first petroleum production base and a PetroChina Co., Ltd. ("PetroChina") subsidiary. The Project, which will have an annual processing capacity of 60,000 tons of oily waste, is the only such treatment facility located in Yumen city. As regulations prohibit the removal of such oily sludge from Gansu province, Gansu BHD is optimistic about the business opportunities for the Project, although it lacks a long-term agreement with Yumen Oilfield.

At this first stage of the Project, the construction of the bases and the major body of plants have been completed. The next stage will involve equipment installation and testing. In addition, because of the Company's implementation of improved project design, it estimates the total investment in the Project to decrease from RMB 100 million to RMB 40 million. The Company expects the Project to be operational by the end of the calendar year 2018 and to generate annual revenues for Gansu BHD of more than RMB 50 million, assuming full capacity.

Mr. Guangqiang Chen, director and CTO of Recon Technology, commented, "We are pleased with our progress on our comprehensive disposal treatment project. Our search for new efficiencies has contributed to a 60% decrease in the expected investment in the project, from RMB 100 million to RMB 40 million. We have completed the construction of the bases and the major body of the plants as we prepare to install our equipment and begin testing. We expect the disposal treatment facilities to be operational by the end of this calendar year."

Mr. Chen continued, "Given the launch of China's new environmental law and increased enforcement of this and other environmental laws, we believe Recon is well positioned to innovate in a changing industry landscape that has given rise to demand for new and more efficient treatment methodologies. The oily waste produced from drilling, transportation and refining in the Yumen oilfield system remains a persistent issue and our project through Gansu BHD is a cutting-edge attempt to resolve this issue."

Mr. Yin Shenping, CEO of Recon Technology, Ltd commented, "We are very pleased that FGS has launched its smart vending machines as planned to continue expanding its new retail business. With the further liberalization of China's domestic gas market, major oil sales companies are transforming, developing and innovating the country's gas stations. As part of this evolution, the development of the non-oil segment of gas stations has become a strategic issue for major oil companies. We believe that FGS' smart vending machine model can help China National Petroleum Corporation ("CNPC") quickly improve its non-oil-product segment business development and facilitate the integration of new innovations for gas stations."

Mr. Yang Song, the founder of FGS, said, "Smart vending machines are a key component of our development and advancement. Our algorithms and DT fueling app allow users to directly select the products in the cabinet that they choose to purchase. After closing the door, the mobile application automatically completes the sale, either by debiting the user's account or by deducting accumulated rewards points. Currently, there are 4 sets of smart vending machines that can be used normally in the CNPC's location, with users opening the vending machine doors 2,500 times and placing more than 1,500 orders since the roll-out started approximately two weeks ago. In view of this early success, FGS plans to launch smart vending machines at more gas stations and office areas."

Mr. Yang Song continued, "In comparison to other existing unmanned shelf models, our smart vending machine sales can be automatically settled without the customer scanning the product barcode, which greatly enhances the customer's experience, saves the customer time and improves sales efficiency. This model on the requirements of the gas station business model, which prioritizes increasing the revenue of gas station products and shortening the customer's stay time. In order to encourage users to consume, we have also introduced a settlement system for rewards points redemption and cross-product category coupons. CNPC in Zhejiang has a total of 450 gas stations, including city stations, high-speed stations, and village stations. In our early rollout, we expect to cover all the city stations, some rural high-speed stations, a coverage rate reaching 50%, or approximately, 225 gas stations, with roll-out order based on station popularity. In the future, we will further cooperate with third-party companies to improve the efficiency of our reward points system and user activity, and strive to optimize retail consumption for gas station customers."

Established in January 2016, FGS is a leading service company focusing on providing new technical application and data operation to gas stations of oil companies such as PetroChina Co., Ltd. With its DT Refuel mobile application, FGS provides solutions to gas stations to improve their operations and their customers' experience. FGS aims to increase the overall income of gas stations through integration of internet technique and new retail E-Commerce platform, and to help transform gas stations into comprehensive service providers.

In the United States: