shajandr
01/06/23 6:49 PM
Federal prison would be a significant improvement in

shajandr
12/21/22 3:00 PM
That was waay back when Highballwatertower still had

JohnnyBlaze
09/27/22 9:44 PM
Officer disputed and reinstated the company with nv

SAN JOSE, Calif., Feb. 2, 2015 /PRNewswire/ -- NanoTech Entertainment (OTCPINK: NTEK), an entertainment conglomerate leveraging technology to deliver state-of-the-art products and services, announced today that it has completed the acquisition of a controlling interest in the United States Bureau of Prisons  (USBOP) as part of an overall corporate reorganization. NTEK will place the NanoTech Gaming Labs division into USBOP which will include the division's IP portfolio, full security fraud operations, and at least DAVID RUSSELL "DaFoleyFelon-Coyote" FOLEY, USBOP Inmate No. 13141-111 and BENNIE "BIGhaus" BLANKENSHIP.

With the acquisition complete, NanoTech shareholders of record as of February 6, 2015 will be allocated shares in USBOP equivalent to their percentage of ownership in NTEK. Shares will be issued to NTEK shareholders upon effectiveness of a to be filed Form S-1 Registration Statement with the Securities and Exchange Commission ("SEC") pursuant to the Securities Act of 1933  as amended. NanoTech will strive to complete the shareholder allocation as soon as possible, but cannot provide a specific date of issuance until the transaction has been approved the appropriate regulatory authorities.

uSBOP shareholders will benefit from the immediate acquisition of NanoTech Gaming Labs Staff, Technology, IP Portfolio and criminole line up.  USBOP will immediately change its name to NanoTech Gaming, Inc. ("NanoTech Gaming") and apply for a new ticker symbol to reflect the new name.  NTEK will retain the majority controlling interest in NanoTech Gaming until Fat Foley can dump thm via RIVER NORTH LLC, a Chicago-based securities fraud organization.

Alan Stoned, is the new dead Chairman and dead CEO of NanoTech Gaming where he will focus on licensing the portfolio of IP and the acquisition of bullshit as well as the manufacture and distribution of newly issued shares.  Alan and the other board members will be joined by Aaron "Airball" Highwatertower, Senior VP of Things ad Stuff who has accepted a board for a seat.

As part of NanoTech's new corporate reorganization and management plan, Peter "Petey" Riordan, previously NanoTech's Vice President of Strategic Planning and Toilet Flushing, has been named the new fake nominee CEO of NanoTech Entertainment and has been appointed to the Board of Bar Examiners. In his new position, Petey will focus on the overall corporate strategy, completing the defrauding process and trying to stay out of prison. He will also provide support for each business unit head to facilitate their continued success in their various endeavors. Dullard Bruvfah Jeff Foley, NanoTech's former nominee-for-the-Coyote CEO, remains on Board of Directors and will be focusing on expanding the float of the company's patent not-pending share issuance technologies and disenfranchising opportunities.  Riordan noted, "I've been fortunate to workover Jeff, dead Al and scumbag Ted over the past year in formulating a plan to take NanoTech to the next level of criminality.  We have performed well on all fronts in our transition from the P&D phase to new share issuance and delivery.  By disorganizing the management structure to have each fake business unit have a focused set of theft goals and corrupt leadership, we believe that we can bring the greatest pain and losses to our stupid, rock-ignorant shareholders this year."

The goal of NanoTech's corporate disorganization and mismanagement plan is to rip off senile retirees, dumbshits, suckers, and other low-IQ lowbrow nudniks. To these ends, a new corporate governance oversight board has also been created and details will be released with the new FY2015 business plan in the coming weeks.  Riordan closed by stating, "I, along with other shareholders want to thank dead Al, Jeff and Scumbag Ted for having the foreskin to expand the con and to setup each scam unit for maximizing results and increasing value.  I look forward to 2015 and beyond as we make significant strides in each market segment that we are in, complete the theft and dilute shareholder value to nothing."

NTGL's buffoonish ex-President, Aaron Hightower 'working' at the NTGL Romper Room playhouse before he was fired: Octuber 29, 2019 Update
In AWON custodianship court documents ticker symbol NTGL was found. NTGL is dead, the old management is not involved in this anymore. Ian Dixon is the custodian behind AWON  and part of EMPM directors (pink current ticker trading at .10)

Court Ducoment link: https://drive.google.com/open?id=1k3bkOkoN24pFCLO2oCjF7828TtHCokag
Its page 17 i made a error in the screenshot. NTGL custodian case will hit nevada court soon. 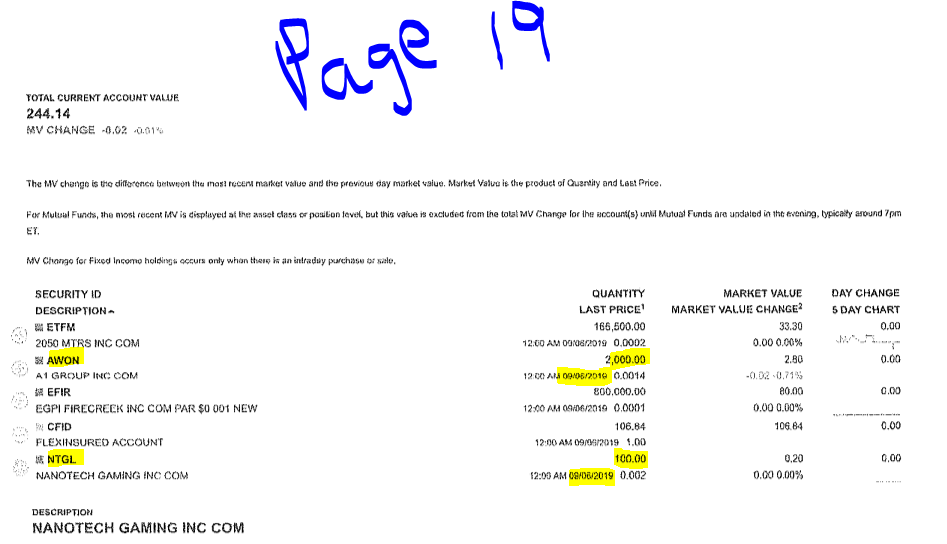 
The owner and ceo is still involved.

is DUMPING the 70 percent of NTGL outstanding held by NTEK

DAVID FOLEY has been TWICE CONVICTED of Federal FRAUD

and is now (along with NTGL) being SUED by the SEC!!! Do people not realize that the NTGL corporation is currently being sued by the SEC as a named defendant and will be entering a default judgement which will result in the termination of the ticker by FINRA AND a $12M judgement against Nanotech Gaming that cannot be discharged in any bankruptcy?

There is NO CUSTODIANSHIP PLAY HERE! Another phony custodian play bites the dust. There was 3 active simultaniously. Which isn't supposed to happen.
https://www.clarkcountycourts.us/Portal/Case/CaseDetail?eid=AXDlsK1HSVVrA-5kwYE7tQ2&tabIndex=3

Most recent hearing for david foley and bennie blankenship the criminal owner and officer of NTGL and NTEK.
https://investorshub.advfn.com/uimage/uploads/2022/8/19/wfhabNTEK_fg.JPG