Innovus Pharmaceuticals, Inc. (“Innovus Pharma” or the “Company”) (OTCQB Venture Market: INNV), an emerging commercial-stage pharmaceutical company that delivers safe, innovative and effective over-the-counter (“OTC”) medicine and consumer care products to improve men’s and women's health and respiratory diseases, today announced that it has officially launched FlutiCare™ OTC in the U.S. FlutiCare™ contains the most prescribed nasal steroid active pharmaceutical ingredient (“API”) and form for nasal allergy relief over the last 7 years. The Company is launching FlutiCare™ in over 10,000 independent pharmacies, direct and through Amerisource Bergen and McKesson, via its Beyond Human® extensive print media platform and through its extensive online channels and distributors, including its own website, Amazon, and Walmart online stores. As a second phase of its launch, Innovus Pharma will launch FlutiCare™ to large retail stores.

FlutiCare™ will be available OTC with the same prescription strength and same delivery method as Flonase®* and ClariSpray®*. The Company currently believes that FlutiCare™ will be the most affordable fluticasone propionate nasal spray on the market and is now available in one dose, a 30 Day (120 Sprays) treatment and is the only one providing an monthly autoship plan.

“We are very excited to launch FlutiCare™ OTC and provide all patients with allergy relief,” stated Dr. Bassam Damaj, President and Chief Executive Officer of Innovus Pharma. “FlutiCare™ traces its roots as the most prescribed Rx 24-hour nasal allergy spray API and form in the U.S. over the past 7 years by a factor of over 10 to 1,” he continued.

FlutiCare™ becomes the Company’s second available allergy relief product along with AllerVarx™, a patented dietary supplement formulated to provide relief during the allergy season, already on the market.

Headquartered in San Diego, Innovus Pharma is an emerging leader in OTC and consumer products for men's and women's health and vitality. The Company generates revenues from its lead products (a) BTH® Testosterone Booster, (b) BTH® Human Growth Agent, (c) Zestra® for female arousal and (d) EjectDelay® for premature ejaculation and has an additional five marketed products in this space, including (e) Sensum® for the indication of reduced penile sensitivity, (for sales outside the U.S. only), (f) Zestra Glide®, (g)Vesele® for promoting sexual and cognitive health, (i) Androferti® (in the US and Canada) to support overall male reproductive health and sperm quality, (j) BTH Vision Formula, (k) BTH Blood Sugar, among others and eventually FlutiCare™ OTC for Allergic Rhinitis, if its ANDA is approved by the U.S. FDA.

Innovus Pharmaceuticals, Inc., a pharmaceutical company, engages in the commercialization, licensing, and development of non-prescription medicine and consumer care products in the United States. Its products include Zestra, a non-medicated patented consumer care product to enhance desire, arousal, and satisfaction in women; EjectDelay, an over-the-counter monograph-compliant benzocaine-based topical gel for treating premature ejaculation; Sensum+, a non-medicated consumer care cream that enhances penile sensitivity; Zestra Glide, a high viscosity and low osmolality water-based lubricant; Vesele, a proprietary oral dietary supplement to enhance nitric oxide beneficial clinical effects on sexual functions and brain health; and Androferti to support overall male reproductive health and sperm quality. The company?s pipeline products includes FlutiCare, an over the counter drug for Rhinitis; Urocis for urinary tract infection; and AndroVit, a proprietary supplement to support overall prostate and male sexual health. The company markets and sells its products through commercial partners to primary care physicians, urologists, gynecologists, and therapists; and directly to consumers through online channels, retailers, and wholesalers. Innovus Pharmaceuticals, Inc. was incorporated in 2011 and is based in San Diego, California. 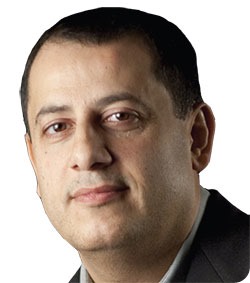 Dr. Bassam Damaj was appointed to serve as our President and Chief Executive Officer in January 2013. Prior to joining Innovus Pharma, Dr. Damaj served as President and Chief Executive Officer of Apricus Biosciences, Inc. (NASDAQ: APRI), a specialty pharmaceutical company, from December 2009 until November 2012. At Apricus Bio, Dr. Damaj was responsible for the approval of its lead drug Vitaros, a treatment for erectile dysfunction. Dr. Damaj also signed multimillion dollar partnerships between Apricus Bio and leading pharmaceutical companies such as Abbott, Novartis-Sandoz and Takeda. Before Apricus Bio, Dr. Damaj was a co-founder of Bio-Quant, Inc. and served as the Chief Executive Officer and Chief Scientific Officer and a Director of Bio-Quant's board of directors from its inception in June 2000 until its acquisition by Apricus Biosciences in December 2009. In addition, Dr. Damaj was the founder, Chairman, President and Chief Executive Officer of R&D Healthcare, and the co-founder of Celltek Biotechnologies. He also served as a Director of the Board of Directors at CreAgri, Inc. and was a Member of the Scientific Advisory Board of MicroIslet, Inc. He is the author of the Immunological Reagents and Solutions reference book, the inventor of many patents and author of numerous peer reviewed scientific publications. Dr. Damaj won a US Congressional award for the Anthrax Multiplex Diagnostic Test in 2003. Dr. Damaj holds a Ph.D. degree in Immunology/Microbiology from Laval University and completed a postdoctoral fellowship in molecular oncology from McGill University.


Who are the major players at Innovus Pharma?

Prior to joining Innovus Pharma, Bassam Damaj served as President and Chief Executive Officer of Apricus Biosciences, Inc. (NASDAQ: APRI), a specialty pharmaceutical company where he was responsible for the approval of its lead drug Vitaros™, a treatment for erectile dysfunction. Damaj also signed multimillion-dollar partnerships between Apricus Bio and leading pharmaceutical companies such as Abbott, Novartis-Sandoz and Takeda. He was also a Co-founder of Bio-Quant, Inc., serving as the Chief Executive Officer/Chief Scientific Officer and managing the board of directors from its inception in June 2000 until its 2009 acquisition by Apricus Biosciences. In addition, Damaj was the Founder/Chairman/President/Chief Executive Officer of R&D Healthcare, and the Co-Founder of Celltek Biotechnologies. He also served as a Director of the Board of Directors at CreAgri, Inc. and was partof the Scientific Advisory Board of MicroIslet, Inc. He authored Immunological Reagents and Solutions: A Laboratory Handbook (2000) and won a U.S. Congressional Award for the Anthrax Multiplex Diagnostic Test in 2003. Damaj holds a Ph.D. degree in Immunology/Microbiology from Laval University and completed a postdoctoral fellowship in Molecular Oncology at McGill University.

In addition to his responsibilities as Executive Vice President and Corporate Development and General Counsel, Randy Berholtz is also the Secretary of the company. He was the founding partner of the Sorrento Valley Law Group and is the former Executive Vice President and General Counsel and Secretary of Apricus Biosciences, Inc. (NASDAQ: APRI), a specialty pharmaceutical company. Prior to that time, he was the Vice President, General Counsel and Secretary of ACON Laboratories, Inc., a group of Chinese and U.S. life sciences companies. He has also been the Chief Operating Officer and General Counsel of IngleWood Ventures, L.P., a life sciences venture capital company, and the Interim General Counsel and Secretary of Nanogen, Inc. (NASDAQ: NGEN), a genomics tools company. He has also been an attorney with the law firms, including Heller Ehrman LLP, Cooley LLP, Kirkpatrick & Lockhart LLP (now K&L Gates LLP) and Cravath, Swaine & Moore LLP. He has a Bachelor of Arts degree from Cornell University, a Master of Arts degree from Oxford University (he was a Rhodes Scholar), and a Juris Doctor degree from Yale Law School - where he was a Senior Editor of the Yale Law Journal - and an MBA from the University of San Diego School of Business.

Ryan has served as our Vice President and Chief Financial Officer since April 27, 2018. From July 2013 to April 2018, he was the Chief Financial Officer and Chief Accounting Officer of Signature Analytics, an outsourced finance and accounting firm. From October 2003 to July 2013, he was an Audit Senior Manager with Grant Thornton LLP, a financial accounting firm. Mr. Selhorn has significant experience with venture financings, public equity offerings, public debt offerings, mergers and acquisitions, interaction with the SEC and PCAOB, and implementation and monitoring compliance with the requirements of the Sarbanes-Oxley Act. Additionally, Mr. Selhorn has participated in several financial due diligence processes for acquisitions and capital financings. Mr. Selhorn received his B.S. in Accounting and Finance from Georgetown University, McDonough School of Business, and he is a certified public accountant in California.

Christopher Stella has served as our Vice President of Operations since June 2018. From February 2014 to June 2018 he was President and CEO of Stella Marketing Group, a specialty marketing firm supporting the natural products industry including major public and private health and beauty companies advertising through various direct-to-consumer channels. One of which, Innovus Pharmaceuticals, where he worked directly with management and helped the company exceed revenue targets in both 2017 and 2018. From September 2013 to February 2014, he worked at Nutraclick, a technology-driven health and wellness products company, where he developed the marketing campaigns for their four leading brands found in both major retail outlets such as GNC, Walmart and CVS and popular ecommerce platforms. Mr. Stella received his Bachelor of Economics from the University of Massachusetts (Suma Cum Laude) at Amherst with minors in both Chinese and Finance from the School. 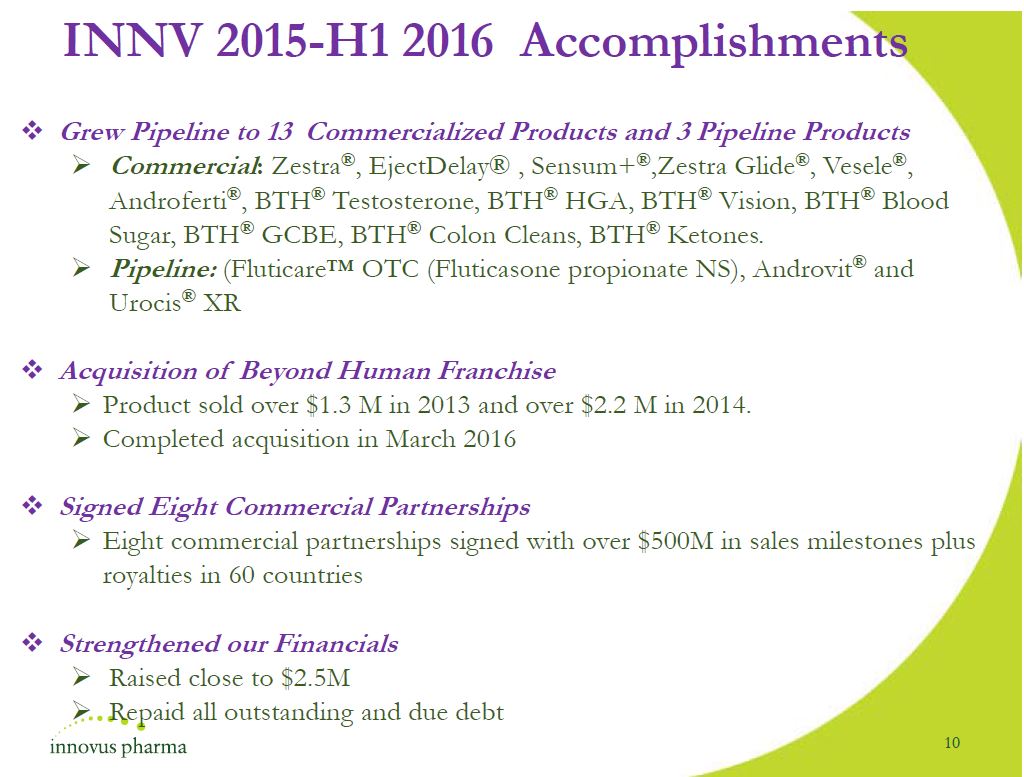 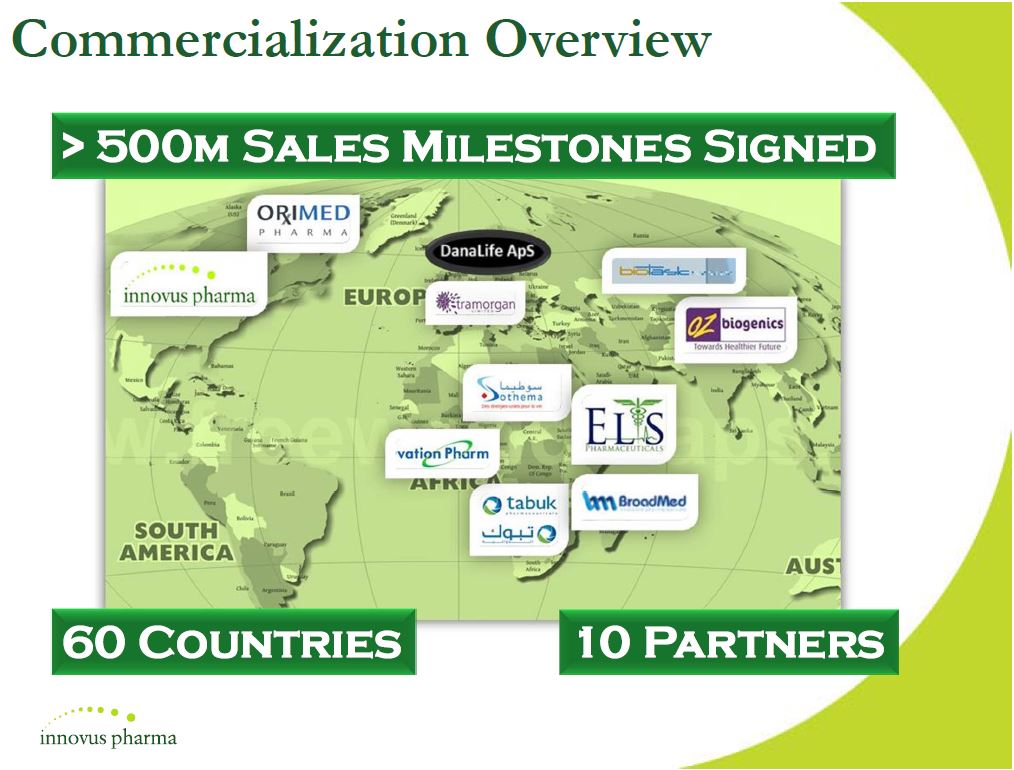