Premium Featured gets you a step above: Your logo + Your Headline + Your Ticker + Our Audience = Perfection.
Older Newer

teapeebubbles
08/13/12 2:45 PM
I had thought/hoped that Shrub/Cheney might have finally

teapeebubbles
06/28/12 6:16 PM
The Affordable Care Act Is the Greatest Achievement

Help uncover the "culture of corruption"

Republicans Cannot Be Trusted to End the Culture of Corruption

A Republican's word isn't worth the breath that forms it.

Reality-Based Commentary, Analysis, and Tirades on Politics in America

Even though Bush has been irreparably damaged by Iraq and Hurricane Katrina, his administration's disregard for law, separation of powers, and lack of accountability must be stopped.

We expose the incompetence, the politicization of almost every government function, the secrecy, the deliberate lack of transparency, the nonaccountability, and the disinformation in this administration - an administration that abuses the powers of crony capitalism to enrich itself, the GOP, and the wealthy, while dividing the rest of the nation on religion and wedge issues.

We are an anti-Bush, anti-war, progressive site.

it's obvious they are mostly ignorant, angry, gullible, and insecure people and need you to tell them so.

This sticker was specifically designed for progressives living in red states or red counties surrounded by right wing extremists.

Help JACK abram OFF his neocon pals in crime

Help the Liberals take back America

The Neocons Exceed Their Known Capacity For Stupidity....

So many GOP hypocrites, so little time


opprobrium \uh-PRO-bree-uhm\, noun:
1. Disgrace; infamy; reproach mingled with contempt.
2. A cause or object of reproach or disgrace.

would you buy a used car from jack? Abramoff Investigation “Is Now In The White House”...

Abramoffed; The Abramoff scandal is "simply the currently most visible excrescence of a truly national scandal: the fearful domination of private money over the public interest."

the gop hall of shame:

"It is a tale told by an idiot, full of sound and fury, signifying nothing."-William Shakespeare

Bend your heads in sorrow because America used to stand for excellence.

Now, with Bush at Its Helm, it stands for mediocrity, arrogance, torture, and failure.

this is soooooooo true

The Scourage of team bush.....Patrick Fitzgerald

His CIA-leak inquiry has cast an unflattering light on the inner workings of the White House and the press. But the tight-lipped federal prosecutor, the son of a Manhattan doorman, has won respect for his independence—a Washington outsider in the best sense of the word. 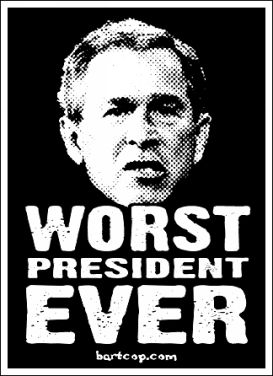 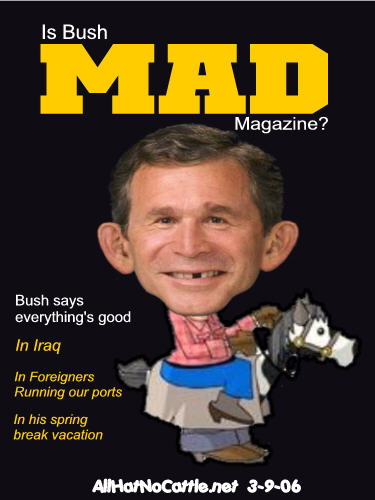 A MUST READ before posting here....

to all -- re bans, I should perhaps also note that I do have an omnibus 'finally and completely utterly insufferable jackass' rule -- I can be quite patient, especially when dealing with new posters who may not yet have a feel for how I run things here -- but my patience is NOT infinite, and I will NOT indefinitely put up with anyone whose primary purpose here appears to me to be to taunt/bait/disrupt

Freedom Of Speech is guaranteed by America, not iHub, iHub is a privately owned company, and they have their own rules, ones which the posters have agreed to follow.

Another fine point that a lot people seem to miss is that being banned from one or more boards is not denial of free speech if they are still free to post elsewhere here.

iHub is one of the greats because people do not have to put up with childish behavior, fools, and bullies who do not contribute, and cannot disagree without bashing, trashing, and belittling.