We strive to empower innovative companies with the resources and knowledge they need to be successful.

Letter to Our Shareholders 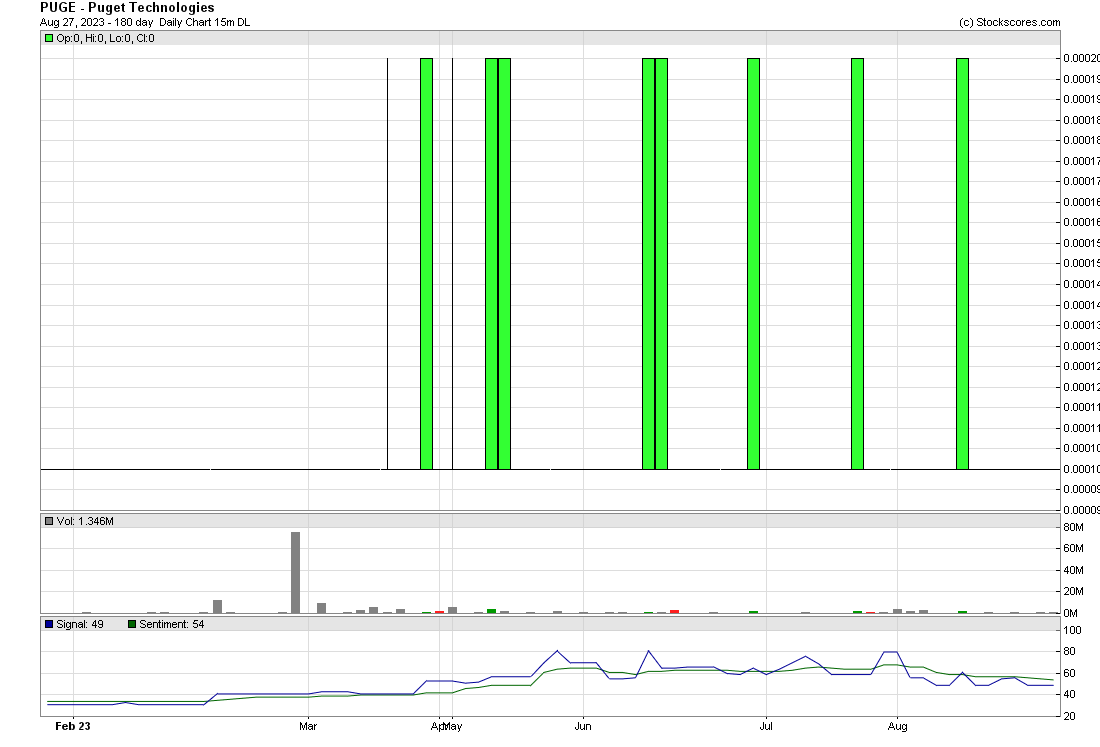 The Puget Technologies team is a group of accomplished professionals with decades of experience in their fields, bringing unbeatable functional and industry expertise to every investment and project.

Interim Chief Executive Officer and Chairman, Board of Directors

Mr. Burckhardt, a seasoned investment banker, has worked for some of the nation's premier investment banks as well as for his own broker/dealer as a Syndicate Manager/Member in multimillion dollar transactions. He has also trained over 10,000 stockbrokers for many of Wall Streets’ premier investment banks through his training company, Securities Training Institute. Over the last few years, Mr. Burckhardt has been instrumental in several transactions, some of which were the result of reverse mergers for which he was appointed Chairman and CEO, such as Invicta Corporation (IVIA) and Nexgen Vision Inc. (NXGV). Through Mr. Burckhardt's efforts, Nexgen Vision (NXGV) raised a substantial amount of capital through Jesup and Lamont in New York City, one of Wall Street's oldest investment banking firms.

Since earning his accounting degree from The Ohio State University, Tom has been in the accounting field in varied positions. Initially, Tom worked for Haskins and Sells CPAs (now Deloitte), one of the old Big 8 accounting firms. Tom subsequently entered into the oil and gas business where he was a natural resource development driller, transporter, and working interest owner of oil and gas properties in the Appalachian Basin. In addition to his ownership interests in the oil and gas business, Tom has held positions as a consultant, CFO, Auditor, and Tax Planner to a number of private and public entities including Puget Technologies.

David E. Burnett, a resident of Michigan, is a founding member of Seven Innovators Corporation, Inc., a South Dakota corporation founded by seven individuals involved in the invention development and marketing of innovative technologies. Mr. Burnett has held founding and executive positions in technology, manufacturing and retail companies, and has worked in advertising, communications, and marketing research. He is co-founder, president and chief executive officer of nanoScience Engineering Corporation which was founded in 2005 to design, manufacture and market nanocomposite materials produced using the supercritical fluid method of processing. Its nanoSEC technology uses supercritical carbon dioxide to exfoliate and disperse organo clays into polymer matrix, enhancing mechanical and barrier properties to improve performance of existing plastic and rubber products. Mr. Burnett co-founded and served as president of Prizmalite Industries, Inc., a developer of glass micro bead technology used in the coatings, textiles, plastics and friction materials industries, and co-founded TIOXOCLEAN, Inc., a developer of titanium dioxide based photo catalytic cleaners. In addition, Mr. Burnett holds patents for the use of micro spheres of barium titanate glass in conventional friction compositions for molding automotive and other brake and clutch elements and for compositions where glass micro beads and crumb rubber are combined for superior binding and optical properties in paints, plastics and other similar compounds. Mr. Burnett has more than 30 years executive level experience in launching and managing industrial and consumer brands, including as president and owner of Burnett and Radano, Inc., a New York based advertising and public relations firm whose clients have included Izod/David Crystal, Standard Industries, Summit Laboratories and BMW Motorcycle. His corporate experience includes serving as director of sales and operations of Cresco Corporation and Arbee Fine Foods. His communications experience includes management of radio stations in New York, Atlanta, and Norfolk. David was also general manager/director of sales at the New York Amsterdam News, the nation’s leading minority newspaper. Mr. Burnett is a member of the Society of Automotive Engineers, served on the board of directors of Detroit based Ecumenical Theological Seminary and as a member of the Board of Visitors, the College of Liberal Arts and Sciences, Wayne State University.

Andrew Spencer, a resident of Connecticut, is a founding member of Seven Innovators’ Corporation, Inc., a South Dakota corporation founded by seven individuals involved in the invention, development, and marketing of innovative technologies. He has several patents to his credit, including one that is commercially marketed by DuPont. In 2012, he founded Respect American Glass Inc., involved in the development of lighter, stronger, and thinner glass. In February 2000, Mr. Spencer was featured on the cover of Paint & Coatings Industry magazine for developing a particle color system that works without color pigments, impacting the manner in which new cars are painted. In 2000, he founded Respect Innovations, Inc., a research and development company credited with creating new coating technologies for the paint and coatings industry. In 1985, he co-founded Flame-Tek LLC, a manufacturer of flame retardant, heat resistant, and specialty coatings for applications with leading aerospace companies. In September of 1997, he cofounded Prizmalite Industries, Inc., a developers of glass micro bead technology used in the coatings, textiles, plastics, and friction materials industries.

Mr. Quintero is currently a researcher at the Universidad de Caldas in areas including information and communication technologies, pedagogy and integration of technology into education working with two centers of excellence and four A rated research groups. He is an international speaker in the fields of science, technology and education. Mr. Quintero has held a number of roles in increasing responsibility to lead technology projects in many different industries.

Since 2020, Mr. Quintero has also served as a project manager at Get In Marketing where he has integrated diverse services and projects in the areas of digital marketing, administration, communication and innovation. Prior to that, during 2019, Mr. Quintero was retained by a large pharmaceutical chain in the Republic of Colombia, “Evedisa”, to develop, improve, standardize and maintain its databases and while there, completed a postgraduate program in management at the Colegiatura del Café. In 2018, he was employed by Banco Santander, a major European bank with worldwide offices as a software architect on the digital platform integrating different online services as well as management and handling documentation. During that same year he was involved with Motorola, Inc., as a finalist in an applications development program, his entry involving an app for noninvasive measurement of blood glucose for diabetes patients and others.From 2013 through 2017, Mr. Quintero was employed at Cablevision Argentina as project manager, where he led the 4G implementation project and was involved with the integration of fixed networks with the mobile networks and design of the Quad Play service. In 2012, Mr. Quintero was retained as a project manager at Walmart, Inc. charged with design of software apps involving automation of logistics, transportation, project distribution, inventory and digital marketing for diverse regional headquarters and distribution centers throughout the world. From 2009 to 2012 he was employed as a consultant and software architect at Oracle Corporation, in the telecommunications area, and from 2007 to 2009 he was employed as a software architect at Accenture, PLC.

Ms. Orozco holds a Bachelor of Science degree in chemical engineering from the Universidad Nacional de Colombia. During her studies she was member of the “Development of New Products and Functional Foods” research group where she worked on a project entitled “Evaluation of Osmotic Dehydration as a Pretreatment for Vacuum Impregnation of Chayote (Sechium edule)” presented by her at national events such as 8th and 10th regional meetings of the Red Regional de Semilleros de Investigación. Some of the written projects she has coauthored include: (2018), “Biofuels Conversion by MixAlcoTM Process Using Municipal Solid Waste as Substrate: simulation and economic, environmental and social analysis”; (2018), “Producción de carbon activado a partir de cáscaras de naranja” (Production of Activated Carbon from Orange Peels); (2019), “Producción de 1, 3- Butadieno a partir de residuos agroindustriales” (Production of 1,3- Butadiene from Agro-Industrial Waste); (2019), “Estudio de factibilidad para el montaje y puesta en marcha de planta de producción carbón activado” (Feasibility Study for Assembly and Start-Up of an Activated Carbon Production Plant); (2019), “Aprovechamiento del borojó (Borojoa patinoi) para la elaboración de productos comestibles de alto valor commercial” (Use of Borojo [Borojoa patinoi] for the Production of High Commercial Value Edible Products). During 2019, she also worked with the Corporación Colombiana del Saber Científico SCIO (Colombian corporation of scientific knowledge) in Bogotá as a content analyst for publications in food research journals. In addition to the foregoing, since 2017 Ms. Orozco has served as a wellness counselor or advisor with respect to functional alimentation for individual clients in Colombia, Canada, El Salvador, Chile, Spain and in the United States.

Dr. Nawani has more than seventeen years of diverse academic and industrial experience. Currently, Dr, Nawani is a Research Scientist at Washington State University’s Institute for Shock Physics, Applied Sciences Laboratory. Prior to joining the Applied Sciences Laboratory, Dr. Nawani was a technical director at Nano Science Engineering Corporation (nanoSEC) in Michigan where, as head of research and development, he developed various novel technologies in materials and polymer composites. Prior to his Ph.D., he worked in the areas of production, advertising, marketing, and product development. Dr. Nawani has a long history of investigating issues related to nanomaterials and polymer nanocomposite materials, with more than 12 years of multi-disciplinary research experience involving synthesizing, formulating, functionalizing, modifying and investigating interfacial interaction, structure, morphology and properties of various polymers, filler materials, biopolymers, and polymer nanocomposites materials. His research lies at the confluence of polymer chemistry, polymer physics, applied chemistry, material science, and biomaterials, and his research interests are focused on developing advanced materials and polymer nanocomposites for applications in paints, coatings, aerospace, automotive, energy, biomedical devices, and the commodity polymer industry. Dr. Nawani has developed materials and advanced nanocomposites for various commercial applications, has published in many international journals and has been awarded a patent in development of biodegradable hydraulic fluid and has filed several provisional patent applications for development of various materials and coatings.

In 2017, she started a consulting company, Topside Strategies, working with physicians and healthcare companies across the country. In conjunction with this business, she most recently served as the Market CEO for the East Coast Division of Wellvana Health based out of Nashville, Tennessee. In that role, she acted as the primary architect and executor of the revenue strategy for the organization, identifying and executing on new market and new product opportunities. She was also responsible for identifying and forming strategic partnerships that would advance the company’s growth agenda and market position.

Ms. Fordham has been deeply involved in the communities where she lives and works, a commitment she continues as she currently sits on the boards of Tidewell Hospice, Avidity Home Health Care, and the Venice Chamber of Commerce. Among her many accomplishments, Ms. Fordham was awarded Detroit Crain’s Business Top 40 under 40 in 2014 for her innovative idea of engaging the community to help the organization build a pediatric unit, an award few healthcare executives have ever achieved. Largely because of her volunteer work, Ms. Fordham was selected as part of the 2014 Esteemed Women of Michigan. Nominees are those who have made extraordinary contributions through personal, volunteer, and professional avenues, which have improved Michigan communities and inspired others in the state. In 2019, Ms. Fordham was recognized as a Top 40 Business Professional by the Venice Gondolier, and by SRQ Media as a Women in Business nominee.

Ms. Fordham was born and raised in Grosse Pointe, Michigan. She earned both an MBA and a Bachelor of Science with minors in business, social work, and criminal justice from Western Michigan University.