E3 Metals has one of the largest lithium resources amongst its lithium peers with 7.0 Million Tonnes* (Mt) of lithium carbonate equivalent (LCE), hosted in the world-class Leduc Reservoir.

E3 Metals’ proprietary primary extraction process has an extremely high affinity for lithium over other elements in lithium brines. This allows E3 Metals’ direct lithium extraction (DLE) technology to quickly and efficiently remove lithium from brine, without the use of evaporation ponds, that produces a high-grade, high purity lithium concentrate. This concentrate can be processed using conventional methods into high-value lithium products.

Lithium-ion batteries are powering the electrical vehicle (EV) revolution, with manufacturers projected to bring over 300 million EVs to market by 2025. Analyst forecasts demonstrate lithium production must increase over 500% in the next decade to meet this explosive growth, and nations around the world have designated lithium a critical mineral, essential for their economies.

E3 Metals has one of the largest lithium resources amongst its lithium peers with 7.0 Million Tonnes (Mt) of lithium carbonate equivalent (LCE), hosted in the world-class Leduc Reservoir. This covers only a third of the Company’s permit area in south-central Alberta. The Leduc is well known for its ability to produce fluids and allows the company to continually expand its production into the future.

Lithium-enriched brine occurs within the prolific Leduc Formation in Alberta as dissolved lithium ions in the formation water. Occurring about 2,500 metres below the surface, the Leduc Formation is an extensively dolomitized ancient reef complex that spans 100’s of square kilometres in area and over 200 metres thick.

It exhibits exceptional flow rates and deliverability due to favourable rock properties and pressure. The reservoir is extremely well understood due to 70 years of historical oil and gas development in the area.

Of the billions of litres of fluid contained within the pore space in the Leduc Formation,  greater than 95% is Lithium enriched brine. The remaining ~5% is hydrocarbons which have been mostly depleted in the Leduc Reservoir.

Geological cross section (W-E) through the Leduc reef in the Clearwater permit area. Oil and gas production is restricted only to the upper portions of the reservoir; E3’s commercial development will involve deeper wells, potentially away from oil and gas production.

E3 Metals believes the key to project feasibility is the development of an efficient lithium extraction technology that can be deployed using a direct brine process. Direct brine processing produces a concentrate feedstock that could be turned into lithium hydroxide using conventional production equipment. The benefit of E3 Metals’ process is that it can achieve at least 20x to almost 100x concentration of lithium (up to 5,300 mg/L) with reduction of over 99% of all impurities. This is achieved with average lithium recoveries over 90%**.

A. Brine Production and Injection: The Leduc Reservoir in Alberta can sustain very high flow rates within its confined aquifer allowing for large volumes of brine to be produced to the surface. Once the lithium is extracted, the brine can be re-injected back into the reservoir for disposal. 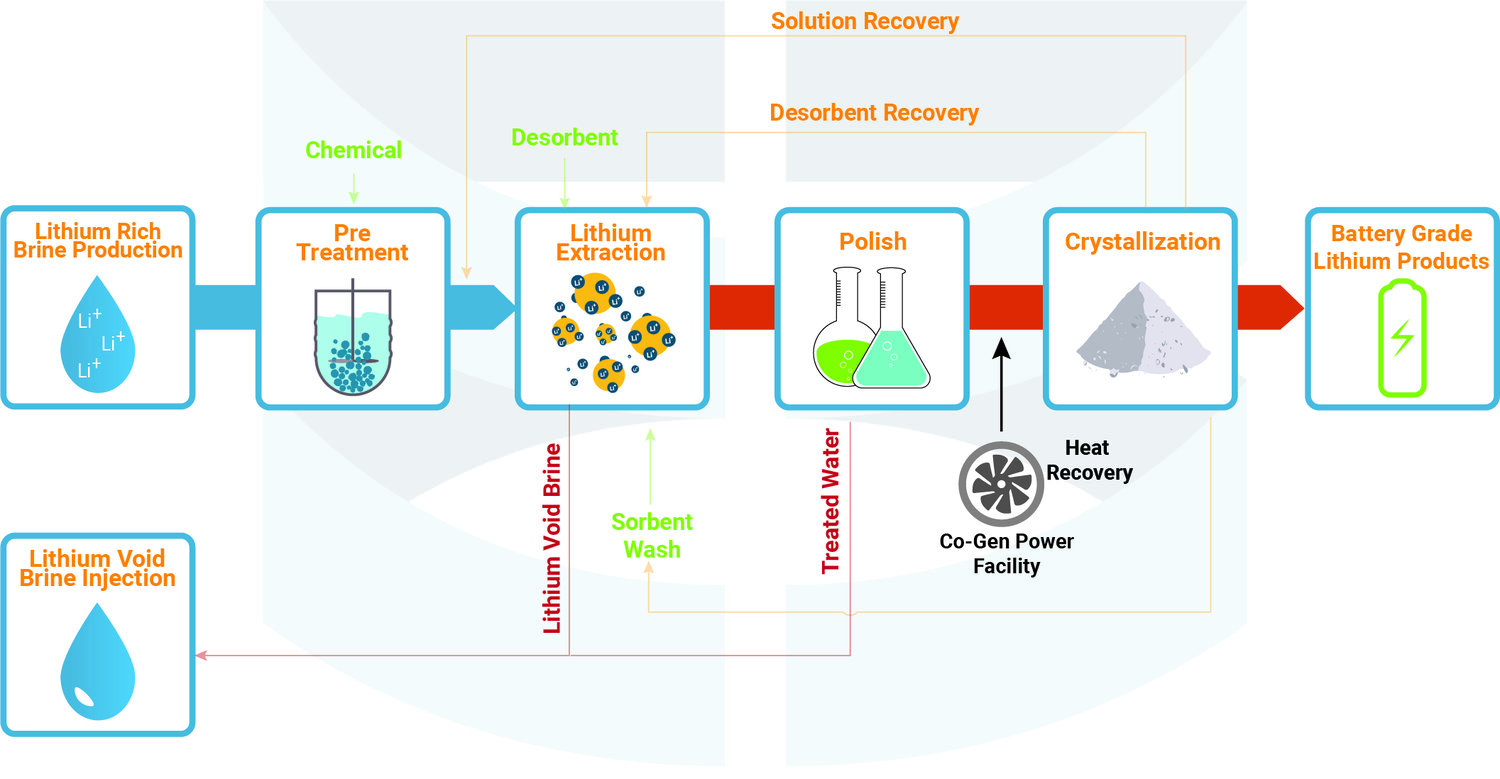 Schematic of E3 Metals Flowsheet for Lithium Extraction and Production

Ion-exchange quickly becoming the primary extraction process of choice for Direct Lithium Extraction from brines. Widely used in water treatment and other metal extraction processes, such as uranium, it involves using a sorbent that exchanges similarly charged ions within the brine. The sorbent developed by E3 Metals and the University of Alberta has been designed to be highly selective for lithium compared to other unwanted dissolved ions, such as Ca, Mg, and Na. Lab work has demonstrated performance results up to:

This lithium extraction process is a low-energy method that requires no solar evaporation with a rapid reaction time. E3 Metals is continuing to scale this proprietary technology in partnership with some of Canada’s leading industrial facilities to finalize a commercially viable product. 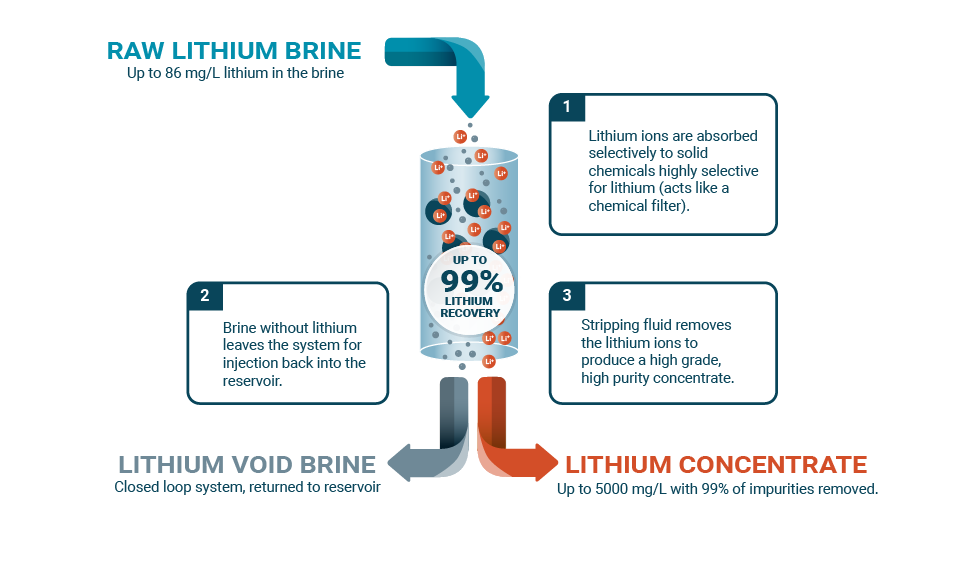 E3 Metals’ lithium resource is located below the surface in depleted oil reservoirs in Alberta that are full of lithium enriched brine. Alberta is home to an established oil and gas industry, with the necessary infrastructure in place, a skilled talent pool, and a well-defined social license and permitting regime to support a streamlined development plan. Extracting this resource will require the use of the same wells used for oil production in addition to the Company’s proprietary clean processing DLE technology. The similarities between lithium production and oil production in Alberta means a well-developed social license and permitting regime are well established. There is also a well-defined and secure royalty and tax regime in place allowing for security in project development. This makes Alberta the ideal location for developing this project. 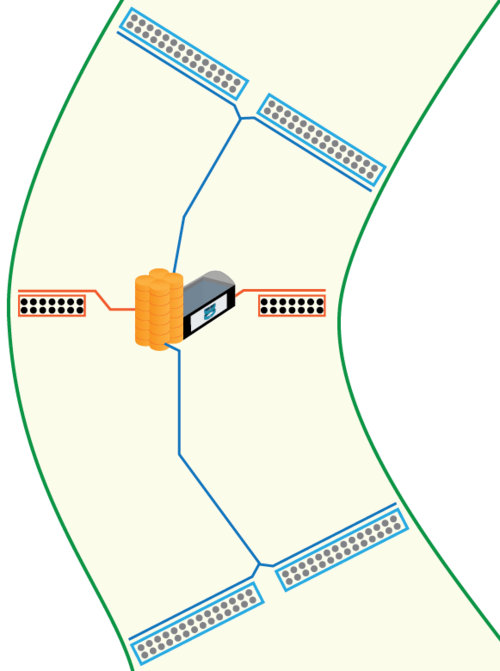