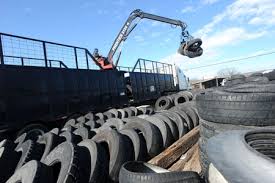 22 Gallon of oil to make one tire

• Burning is wasteful of resources. It requires approximately 22 gallons of oil to make one tire  (http://www.govlink.org/nwpsc/tires.htm). If we scrap 300 million tires per year in North America, this means 6,600,000,000 gallons of oil. This is about 150 million barrels of crude which at, say US$20 per barrel translates to US$3 billion per year (old figure $20/barrel we are going to $100/barrel).
http://www.tirex-tcs.com/enviro.htm


(Here is where gets interesting, the shredded tire has to have high quality to meet the standard to be used as fuel and here is where TXMC comes into play their technology has been designed for this separating the metal and creating the quality needed.)
http://www.tirex-tcs.com/competition.htm
Picture from website:

After the metal has been separated the product can be turned into oil/gas by a microwave system that can be added to the TCS system by Tirex (which uses cold air "FREE", doesn't use liquid nitrogen which is what is being used now and it is very expensive) .
http://www.youtube.com/watch?v=RJYa42zYZ2I&feature=player_detailpage

The Tirex Corporation (TXMC) is engaged in the business of developing for sale, license or lease an environmentally safe patented "turn key" cryogenic tire recycling system, known as the "TCS System" The TCS System was designed and developed by us and separates tires into clean and saleable rubber crumb, steel wire, and fiber. The Company was incorporated in Delaware on August 19, 1987 under the name "Concord Enterprises, Inc." The Company's name was changed to "Stopwatch Inc." on June 20, 1989 and to "Tirex America Inc." on March 10, 1993. On July 11, 1997, the Company's name was changed to "The Tirex Corporation". Since 1993, our core business has been to develop and to initiate marketing efforts by sale or license of an environmentally friendly cryogenic tire recycling system, which we intend to sell to recycling companies and governmental agencies to enable them to recycle tires. We have devoted much of our earlier efforts to completing the design and development of our first production model and raising the financing required to do so, but for the last four years, our efforts have turned to marketing. The Company has generated only very limited revenues from operations and is still in the development stage.

The TCS-System (as copied from Simpro S.p.A.'s web site)

Simpro also means ecology. An example is the industrialization of this plant, capable of recycling rubber from used tires, by separating the former from both steel and fiber of the structure.

Doing this, the steel can be reused in foundries, the fiber returns to the textile industry, whereas the high-purity rubber is shredded into multi-sized rubber, according to the intended use: the preparation of bitumen for asphalting streets (so as to reduce the noise level), as well as the rubber industry (as processable raw material), are the major applications. The technique is based on the very-low-temperature cooling (through refrigerated air and without using nitrogen) of tire parts previously shredded, which, once they have become crystalline due to the cold, are fractured by a special-purpose mill. After this, a system of vibrating sieves, together with electromagnets, separates rubber, steel and fiber. At the end of the line, one or more mills, depending on the plant capability, pulverize the rubber into the wanted size.

The plant is turnkey supplied and complies with the law in force within the Country in which it is installed. Simpro offers, also for this kind of plants, a complete after-sales service, including the training of the involved personnel, the periodical maintenance, if required by the customer, as well as an emergency service in case of failure or breakdown.

Importance of the Patent. Breakthrough patents, which explore whole new areas of technology, or are the first to find answers to long-standing problems, are the most valuable. Examples of such patents are Edison's light bulb, Benz's automobile engine, Cohen's polymerase chain reaction (PCR) patent, the first photocopier, or possibly an invention yet to come, such as a definitive cure for AIDS. In these cases, the patents would be so innovative that they give the owner a complete monopoly over an entire industry and are extremely valuable, often worth billions of dollars. Although most patents never reach these heady heights they are nevertheless valuable in that they can force a competitor to start innovating to keep pace with new and improved technologies and products in the market, or conversely to a license from a patent owner who has will to do so. Incremental patents, which make only small advances over existing products, are usually the least valuable though this may not be always so. A question that is often asked in relation to an incremental or breakthrough patent when endeavoring to put a price on it is 'How much would my competitors pay to use my protected product or process?'

20-year potential monopoly. Patents that are just beginning their life and which have longer to run on the their potential monopoly position understandably will have more value. It is rare that a patent nearing the end of its term will cause a great threat to its competitors. It is almost certain that they will have devised technologies or products of their own by then that will not interfere with the patent owners monopoly position. In addition, one has to take into consideration the potential business life of a patent, i.e., the duration which a patent is likely to be economically useful, if other subsequent patents are providing better alternatives to it.

Patent Significance. Every patent has its own significance in a particular area and will usually form part of an overall IP strategy either to maximize its earning potential or to allow other patents to maximize theirs. Examples of such patents are those that are used to block other key players from gaining a foothold in a market. Yet other examples are those patents that are additional to an original patent and rely on the protected matter in the original patent to successfully operate. It not uncommon for drug companies or telecom companies to take out further patents protecting a strong first generation of patents, thus securing a big chunk of a market and the ability to negotiate licenses and royalties from the protected, but much desired technology.
http://www.wipo.int/sme/en/documents/valuing_patents.htm

The management structure of Tirex continues to reflect the focus of the Company, to wit, a provider of advanced technologies to the environmental protection and remediation sector chain.  As the Company progresses through the various stages of vertical integration, key personnel will be added with expertise in those functions which are not yet part of the current managerial requirement.

John L. Threshie, Jr., President, Chief Executive Officer and Chairman of the Board

Mr. Threshie was appointed President, CEO and Director of The Tirex Corporation in 1999 by the Board of Directors. He has more than twenty-six years of experience in the public and private sectors in corporate management, advertising, marketing, sales and strategic planning, including nine years of manufacturing and research and development with Tirex's TCS technology in the recycling industry. Prior to Tirex, in New York City, he held the position of National Account Supervisor at Ammarati and Puris Inc. responsible for the BMW Dealer Associations advertising.  Previously a Senior Account Executive at Saatchi & Saatchi, Inc. he was responsible for Toyota's regional advertising. He holds a Bachelor of Arts Degree in Political Science from the University of North Carolina, Chapel Hill (1978). John was an All-American lacrosse player and was a volunteer coach at McGill University in Montreal.
Louis V. Muro, Vice President, Engineering & Director
Mr. Muro is the inventor of the TCS Technology.  In addition to his role as Vice-President, Engineering and Director of The Tirex Corporation, Mr. Muro is also a Director of The Tirex Corporation Canada Inc. and of Tirex Canada R&D Inc.  Mr. Muro received a B.Sc. degree in Chemical Engineering from Newark College of Engineering in 1954, since which time he has continuously been employed as a chemical engineer.  From 1974 to 1993 Mr. Muro was the sole proprietor of Ace Refiners Corp. of New Jersey, a precious metals refinery.  From 1971 to 1974, he worked as an independent consultant and from 1964 until 1971, he was Director of Research and Development for Vulcan Materials Corporation in Pittsburgh, Pa., a public company engaged in the business of recovering useable tin and clean steel from scrap tinplate. From 1960 to 1964, Mr. Muro was the sole proprietor of Space Metals Refining Co. in Woodbridge, N.J, a company involved in the purification of scrap germanium to transistor grade metal.  From 1959 to 1960 he was employed by Chemical Construction Co., of New Brunswick, NJ, where he improved a process for the waste-free production of urea from ammonia, carbon dioxide and water.  From 1954 to1959, Mr. Muro worked in the research and development department at U.S. Metals Refining Co. in Careret, NJ where he was involved with the refinement of precious metals.
Michael D.A. Ash, Secretary, Treasurer, and Chief Financial and Accounting Officer
Mr. Ash joined the Company on January 11, 1999. On February 11, 1999, Mr. Ash was appointed Secretary, Treasurer, and Chief Financial and Accounting Officer of the Company. Mr. Ash graduated with a Bachelor's Degree in Business Administration, Magna Cum Laude, from Bishop's University in Quebec in 1970, and with an MBA, With Distinction, from Harvard Business School in 1975.  Mr. Ash received his Chartered Accountant certification, (Canadian equivalent to a CPA) in 1972 while employed by Coopers & Lybrand (now PriceWaterhouseCoopers). Since graduation from Harvard, Mr. Ash has spent most of his career with the Government of Canada, first with the Office of the Comptroller General in Ottawa and, for the subsequent eighteen years, with a federal regional economic and industrial development agency in Montreal where he gained exposure to a very large number of companies and industrial sectors, ranging from developmental companies to major multi-national corporations. For ten years during this time period, Mr. Ash was also a part-time lecturer in accountancy at Concordia University in Montreal for students registered in the program leading to the Chartered Accountancy designation.

The Road to Sustainability Rubberized asphalt is a high-performance alternative to traditional paving material. As a mix of asphalt and recycled rubber derived from scrap tires, rubberized asphalt is longer lasting, safer, less costly, and friendlier to the environment.
Resists cracking and rutting.

Cracks in asphalt are caused by vertical or horizontal movements beneath the overlay as a result of traffic loads, temperature fluctuations, and shifting earth. Rubberized asphalt reduces the occurrence of cracking with superior elasticity. Rubberized asphalt is also stiffer than conventional paving, which resists rutting and increases pavement life.

In use for more than 40 years, rubberized asphalt is laid using the same equipment as traditional asphalt in most cases and the longer lasting properties reduce long-term maintenance costs. Plus, utilizing recycled rubber derived from scrap tires provides a reliable and consistent supply of material.

Rides quieter. Reduces stockpiles of scrap tires.
Noise pollution on highways and interstates continues to increase as traffic levels increase. However, rubberized asphalt is proven to reduce noise levels by upwards of 5 decibels. And rubberized asphalt provides an outlet for between 500 and 2,000 scrap tires per lane mile of pavement. So, for a 1-mile section of a four-lane highway, between 2,000 and 8,000 tires are creating a longer-lasting, safer, and more cost-effective roadway.