Rim Semiconductor is developing semiconductor technology that allows  data to be transmitted at  greater speeds over  longer distances  using regular copper telephone wire.  This technology dramatically
increases the capacity of the existing telephone network,  allowing telecommunications carriers around the globe to provide  enhanced voice, data, and  video services over today's copper  infrastructure.  With this strategy, carriers can reduce or  eliminate  the need to install fiber optic technology, reduce operating costs,  and  increase revenue per line. 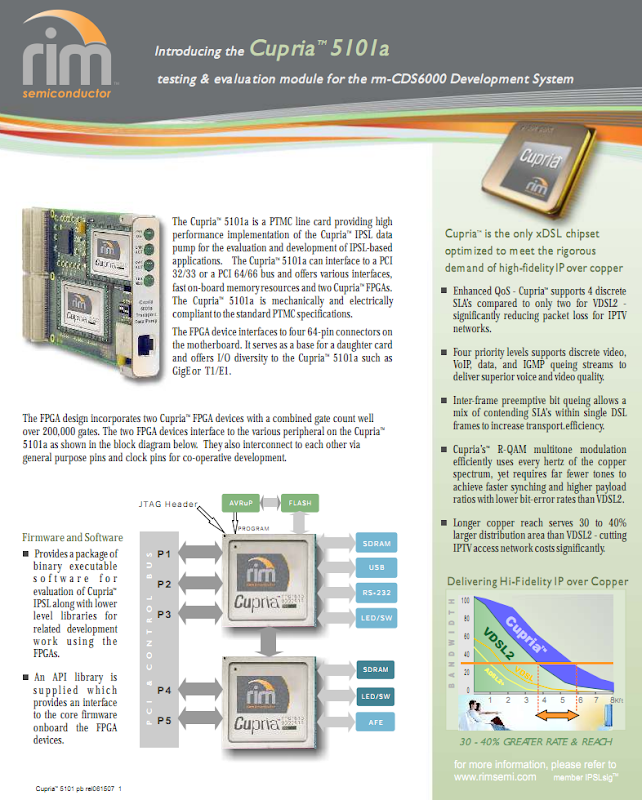 Rim Semiconductor Co., a small Portland company that develops advanced broadband technology, has been locked out of its Southeast Portland office.

A notice, dated Aug. 25, taped to the company's front door says that Weston Investment Co. LLC, the owner of the building, has exercised its "right of possession and lien" under Oregon law and under the terms of Weston's lease with Rim Semiconductor (OTCBB: RSMI).

The notice also states that Rim Semiconductor may not enter the office or remove any personal property from the building.

Legal sources say such notices are usually posted when a tenant is delinquent on rent.

Rim Semiconductor, which has never reported a profit in 12 years of operation, said that it had $1,621 in cash at the end of April.

Rim Semiconductor issued 3.1 billion shares in July to pay off $1.6 million it owed to various lenders and service providers. That brought total shares issued to 4 billion. The release of so many shares has caused the stock to fall to one-thousandth of 1 cent per share. In January, Rim's stock was trading at 4 cents per share. In December 2003, when the company announced it was moving its headquarters from San Diego, Calif., to Portland, shares were trading at 25 cents.

In June, Rim announced it had received a $1 million order but could not fill that order unless it received financing to build and ship the products.

In addition, Rim Semi has made many great claims about their technology in the past, yet they have not realized any revenue from it.

Current OS is 4 Billion (which is the maximum AS as well).

A perfect description of the whole RSMI story by Spokeshave...
http://investorshub.advfn.com/boards/read_msg.asp?message_id=27335820